Can you believe some people (WHO I LOVE DEARLY) spent the last 6 years arguing off and on about how Wind Waker could have beaten Majora in a direct 1 on 1 match? Allen setting up rivalries wasn't the best idea in a couple cases and we all looked like idiots for thinking Pokémon would get in the way of this, but at the end of the day this was a match worth having.

I hate being that guy, but:


There was never any debate here, and Majora would have won this match whether or not it was getting some big contest bandwagon. Majora is a very beloved title, while a lot of people view Wind Waker as the death of Zelda.

Zelda games before and including Majora's Mask: The Legend of Zelda, The Adventure of Link, Link to the Past, Link's Awakening, Ocarina of Time, Majora's Mask. All A++++++ games. And go away if you don't think Zelda 2 is godtier, kthx, I don't want to hear it from people who don't like hard games.

It would have been the crime of crimes had Wind Waker won this match. I'd seriously put it right next to Brawl > Melee as a "what the f*** were you people thinking?" type of match. I'm not as vocal about the Zelda series as I am the Smash series, but I love them almost equally and Majora > Wind Waker was absolutely awesome. Good to know you people got a series correct this contest! Twilight Princess being strong is kind of bad, but I'll forgive it since you guys killed Brawl. 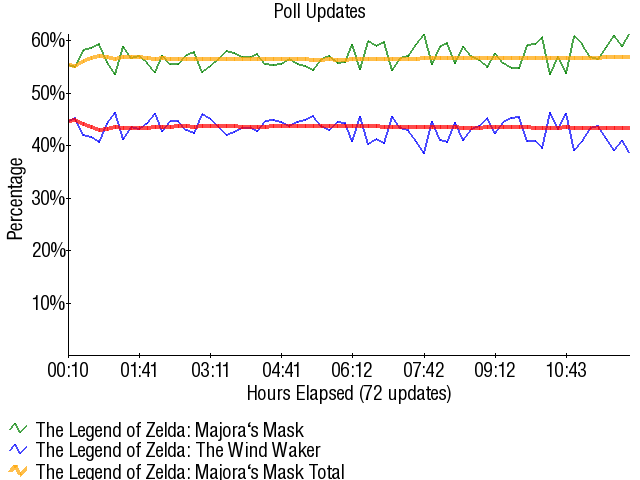