Right after the dogfight with FFX, Majora immediately had to turn around for what would be a presumed dogfight final against a heavy hitter from its own company. It was not a final many people expected, and it would end up a final not nearly as close as the final score would indicate.

Though Zelda would end up winning this match by 900 votes, that number really is a misnomer. Because for the second match in a row, Majora's Mask went out and rocked face early with borderline joke trends. But unlike the match with FFX, Majora and Brawl have near identical trends with Majora getting the clear overnight advantage. So when Majora went out and took control of this match early and kept increasing its lead by a considerable rate overnight, the match was all but over. And whenever Brawl looked like it was going to make an overnight push, Zelda took it all back. It continued on this pace well into the morning and almost until noon. The lead peaked near 1500, but Brawl did come back and win the day vote to make this match respectable.

Were this final a 12 hour day match, Brawl would have won it. Beating Twilight Princess during the day like it did and cutting 600 votes off of a Zelda game in the final during the day was very admirable, but the push in the final was window dressing. It was clear Zelda had this match won when Brawl comeback attempt was much too slow, and even the big cuts were pushed back or countered.

In the end, this was the closest final we've ever had and arguably the only final where we had zero clue who would win going in. It was also our first true blue Good vs Evil final since Link vs Mario in 2002, and once again it was the good side that came out on top.

I joked a lot about Zelda fans being drones this contest, but I will never again make fun of that fanbase. You guys came through when it mattered most, and prevented the terrible Super Smash Bros. Brawl from being named our GameFAQs Game of the Decade. Nothing would have been more embarrassing. Seriously, any of the other 127 games would have been better. Thankfully, we ended up with a pretty deserving one winning. Who knows what happens if Melee beats Brawl, but that's ancient history now.

Your Game of the Decade, Majora's Mask!

Some argued if Majora deserved it, and Lightning Strikes made the best point about all this:

From: Lightning Strikes | #009
Brawl is one of the most popular games of the decade, one of the more acclaimed games, and is definitely the most hyped. Majora's Mask is more a shadow of the 90's. It was developed in the 90's, using an engine from the 90's, and was on a 90's system. It's not really "of the decade".

Though Majora was technically released this decade, it really does have a 1990s feel to it. That game winning our contest the way it did was a clear old games > newer games message from this site. 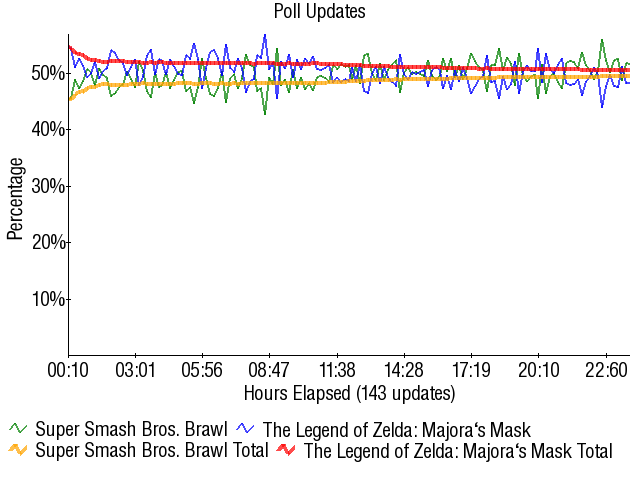 • Previous Match       • Next Match
Retrieved from "https://board8.fandom.com/wiki/(2)Super_Smash_Bros._Brawl_vs_(1)The_Legend_of_Zelda:_Majora%27s_Mask_2010?oldid=69272"
Community content is available under CC-BY-SA unless otherwise noted.