There are few things to actually note about this match, since Sephiroth wasn't going to actually lose it. Thankfully, this match treated us to arguably the best thing we'll ever see in one of these contests. Bowser took the early lead on Sephiroth, but unlike the typical Sephiroth opponent, Bowser was actually able to hold on for a few minutes.

It eventually led to this piece of perfection in the stats topic:

There were about 10 of these posts, all within a second or two of each other, all with the exact same content. It was the stuff of legend.

Everyone was well aware that it wouldn't last and that Sephiroth would eventually pull away for an easy win, but it didn't actually matter much. The only thing to really draw from this match outside of the crazy 1000 vote sample and the awesome match pic was this poll: http://www.gamefaqs.com/poll/index.html?poll=1363

Either Bowser increased between 2003 and this contest, Sephiroth was the direct benefit of the Mario/Crono 2003 after effect, or there was a massive anti-voting of Sephiroth in this match that made Bowser look stronger than he really was. As for which are valid, your guess is as good as mine. 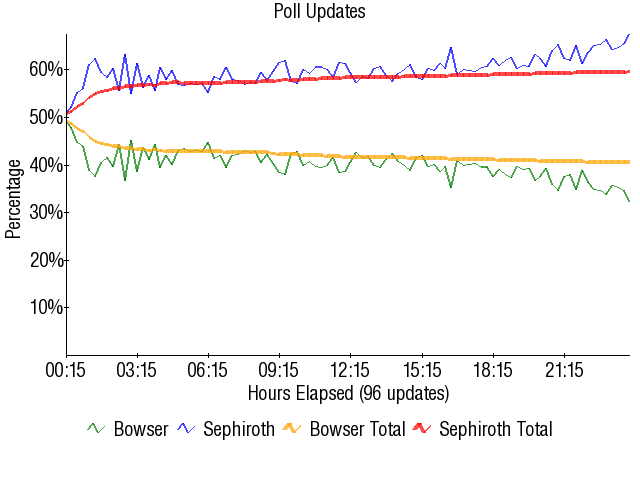 Retrieved from "https://board8.fandom.com/wiki/(1)Bowser_vs_(1)Sephiroth_2005?oldid=55999"
Community content is available under CC-BY-SA unless otherwise noted.