As good as this match looked on paper before the contest started, Bowser turned it into an absolute joke within seconds. Revolver Ocelot was never in this thing, and for a possible pre-contest upset, a 66-34 result was somewhat disappointing. The only real thing of note about the match was the theme for the match picture: head shots of the characters with sprites of their heroes in the background.

There isn't much to say about this match besides what's already on the surface, but Ocelot's getting killed raises a few questions here and there. One, Bowser completely rolled through his first three opponents en route to a very easy division victory, but his first two opponents were mere jokes; Ocelot is not. Ocelot may have won his fourpack by default, but this match gives the impression that Bowser may have perhaps been stronger in this contest than in contests past. We have no real 2004 data on Bowser, and a large increase between Summer 2003 and Spring 2005 was not out of the question. Bowser has been in a few good games in that timeframe.

There's also the Ocelot/Liquid question, which we wouldn't have to wait long to see answered. Before this contest, the stronger character between Ocelot and Liquid was a good debate, and given Ocelot's bombing in this contest, all Liquid needed to do to both prove his 2004 value and his superiority over Ocelot was to have a good showing against Sephiroth. It wasn't out of the realm of possibility, though we were clearly in for a Bowser/Sephiroth Final Four match, and the question of whether or not Bowser truly did increase would soon be answered. 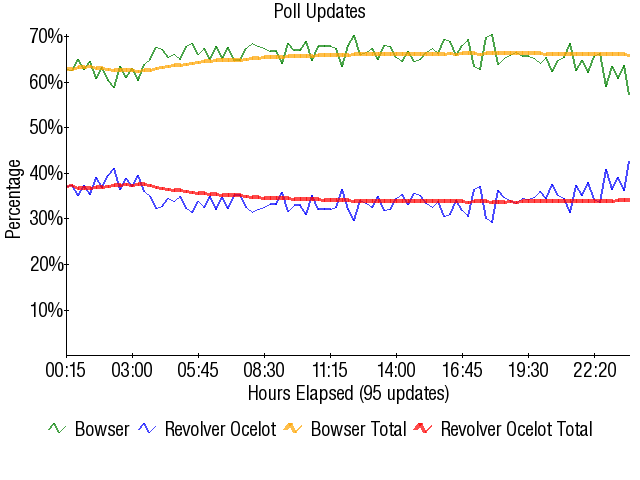 Retrieved from "https://board8.fandom.com/wiki/(1)Bowser_vs_(3)Revolver_Ocelot_2005?oldid=55991"
Community content is available under CC-BY-SA unless otherwise noted.