It feels really weird calling a match a divisional semifinal when it's actually the second round.

Anyway, this was one of the first matches that started causing people to believe that this contest may have slightly different voting trends than past contests. Now granted, we didn't have any solid data on Sigma before this contest started, but when the main villain of the Mega Man X series gets his face beaten in this badly, you have to wonder what in the world was going on from the other side of the poll. Was it conceivable to think that Bowser may somehow be stronger in this contest as opposed to any other, or does Sigma just suck that much? We didn't get many definitive answers to this, and even knowing what we know now, we still don't have any definitive answers. It's easy to blame this being a "gimmick" contest on the different voting trends that we saw by the end of the contest, though discrediting fluctuations in character strength may be a bad idea. It's more than possible that Bowser grew stronger between Summer 2003 and this contest, and we don't have any true value for his performance in 2004 due to him being on the ass end of an SFF match against Mario.

Of course, the possibility of Sigma simply being that much of a weak bastard wasn't necessarily out of the question, and this match helped explain why he did so badly against Andross. After Mega Man and Zero, there is likely a huge dropoff in character popularity before you reach anyone else, and watching this match made you wonder whether or not Wily truly did have the advantage in his upcoming duel with Revolver Ocelot. Wily was likely stronger than Sigma, but if Sigma was this pathetic, you wonder if Wily was strong enough to be able to handle Ocelot. Ocelot may have had his problems with Nemesis, but Ocelot/Wily looked more like a battle of which character was weaker rather than which character was stronger after seeing Sigma get beaten like this. Sigma managed to save face in preventing himself from falling under 20%, and he managed to gain back a percentage point or two as the day wore on, but a first class ass kicking is a first class ass kicking no matter how you look at it. Sigma was undoubtedly one of the biggest disappointments of the contest.

On a side note, you can't help but love the round where the match pics are sprites. 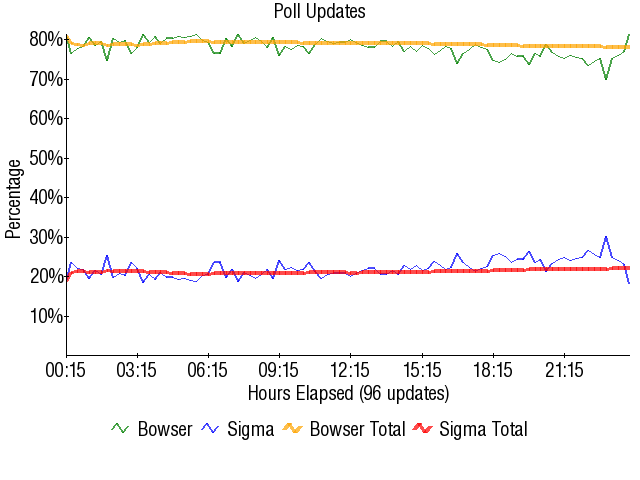 Retrieved from "https://board8.fandom.com/wiki/(1)Bowser_vs_(4)Sigma_2005?oldid=55975"
Community content is available under CC-BY-SA unless otherwise noted.