Despite the other Zeldas faltering in this contest, Link to the Past remained strong after stalling a bit against FF6. Winning by over 4000 votes after starting out the way it did, paired with Chrono Trigger losing the day vote to every opponent it had faced, set up a match that was truly up in the air.

Soon after this initial jump, however, the true match began. What would follow would easily be the best wire to wire match any of us had ever seen in this contest. As expected, Link to the Past caught the morning vote; however, it was not enough of the morning vote to flat-out say that the match. Link to the Past simply went on a very slow, methodical pace to take down the initial lead of 500 taken by Chrono Trigger in the match. It was such a slow pace in fact that it took all morning and part of the afternoon for Link to the Past to even catch up, and even longer to take the lead. But LTTP still managed to do so, and like any other poll involving Zelda, LTTP managed to overtake and begin building a lead on Chrono Trigger through the morning and afternoon.

But no sooner did Link to the Past's slow pace allow it to take a lead of 180 votes did Chrono Trigger begin fighting back. Chrono Trigger as always managed to lose percentage through the morning and afternoon, and as always it began a recovery. This recovery was somewhat different than the rest. Chrono Trigger, after pulling even with LTTP, remained deadlocked with LTTP for literally hours. And I'm not talking about within a few hundred, either. I'm talking dead ****ing even. For hours. The two games went at it like heavyweight prize fighters all through the evening while managing to stay within each other by the slimmest of margins. Every time one game made a small push to take a slim lead, the other game countered. Not only did this create complete chaos all over the site, but it made for the best match any of us had ever seen. The matchup also managed to finally get the vote totals in our contest back up, as every match from here on in managed to score a ton of votes.

The interesting thing about this match was how it was virtually a statistical impossibility for two poll options to stay this close for such a long period of time. When tens of thousands of votes come pouring in, having the two games stay apart by vote differences in the singles and tens through such an extended timeframe, you know you have a legendary poll on your hands.

For a long time, many people forgot about who they were rooting for in the match and simply concentrated on how exciting a match it was in the first place. Screen shots were taken, multiple sightings of 50%-50.01% were seen, and for the longest time, we had two games going at it in this poll in the manner that any poll featuring two legendary titles should go at it. Whenever one game would even get a lead as small as 20 or so, the other would counter with ease. There was multiple points during this madness in which Chrono Trigger looked like it was finally going to pull away for good, but LTTP managed to counter.

Sadly, the ending of this match was an anticlimactic as it could get. Chrono Trigger, like it did in every other match it was in, managed to recover from its percentage loss with the later part of the vote in the contest. A match that was literally legendary ended with a simple late night Square push to send Chrono Trigger to the win. LTTP tried to recover, but the AOL users (Zelda fans) typically go to sleep before us college students.

No seriously, I'm never going to get over how funny that topic was:

"65% of AOL users are voting Zelda.
Just as unsurprisingly, the Korean netblock is voting 65% Starcraft."

It's as if CJayC was calling all of the Zelda voters kiddie AOL users. Funniest damned thing I have ever seen.

Getting back to the point, Chrono Trigger won a match in which the largest lead was 500. A difference of 500 in a match that scored nearly 100,000 votes is a wonderful thing to watch no matter which game you were rooting for, and we may never see anything like this again. That time period of four hours or so in which the games were literally dead even was about as crazy as it gets. 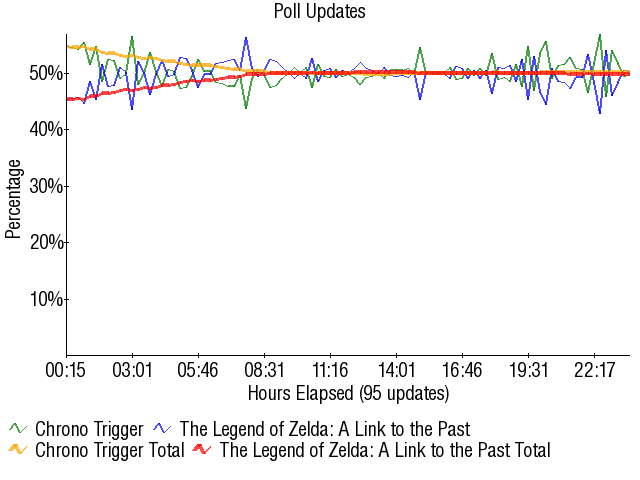 This match typifies the point I made in an earlier writeup: a match doesn’t need down-to-the-wire slugfests and tons of lead changes to be exciting. Sometimes the best matches are exemplified by stillness, the greatest tension of all. This match, more than any other, exemplifies this. These two games were literally neck-and-neck with each other for hours. Imagine a poll where the percentages, the vote disparities, the lead – none of it changes for hours on end. That’s tension: waiting for something to happen and you’re not sure if it will. Definitely an underrated gem of a match here.

Retrieved from "https://board8.fandom.com/wiki/(1)Chrono_Trigger_vs_(6)The_Legend_of_Zelda:_A_Link_to_the_Past_2004?oldid=55761"
Community content is available under CC-BY-SA unless otherwise noted.