Snake vs Sephiroth was the hyped match pre-contest, but as the contest wore on it became increasingly clear we should have been hyping the Samus/Cloud winner versus Snake. Snake had a legitimate shot at pulling off the upset either way, although early on against Cloud he didn’t do as well as one might expect. He won the board vote, but was actually going down just before the freeze. He recovered and built a lead of 400 through the first 90 minutes, but everyone knew the Total Domination Zone would end that fun before long.

Sure enough, Cloud began coming back and fought through all of Snake's best efforts to stall. But as Cloud got the lead below 100 and started making a push to take control of the match outright, a funny thing happened. Snake stalled. A lot.

Like, stalled through the entire TDZ and just completely refused to let Cloud start winning. It was like watching a Solid versus Liquid fight in poll form, with neither character giving an inch. For nearly three hours, these two were either tied or within 30 votes of one another. There was some legitimate buzz in the air about Snake pulling off a miracle and perhaps winning this match -- barring creativename's Buzz Killington act in the stats topic, that is. If the entire board is happy about maybe seeing something new, don't rattle off a million trends and go "well because of this statistical proliferation in the stats, Cloud should begin winning around X hour and win with Y percent". No one wants to hear it, and it totally kills the unknown factor that makes these contests so fun in the first place. For whatever reason it was Snake matches, not Pokemon matches, that brought out the absolute worst of people this contest.

Anyway it's rare to see the morning vote save Final Fantasy 7, but it happened. We were also calling for MGS's crappy day vote to show up at the worst time, and in this match it happened. Snake held on for dear life once it was clear Cloud was going to win the morning vote and the match, and before long he gave up the ghost and watched as Cloud buried him. It was a great contest run for Snake, but it came to an end in the semifinal. This left us with a Link/Cloud final. Again. You can imagine how happy people were about this, and some were calling for Link to rise backlash and double Cloud early.

Snake's deep runs in recent years have almost always come at Final Fantasy 7's expense, and the day we see Snake upset Cloud isn't far off. The only thing left for Snake to do is to make a deep run at Nintendo's expense. Instead of having to go through Sephiroth and Cloud, he needs to get past Samus and Mario. 1 on 1, too, not in gimmicky 4way crap. 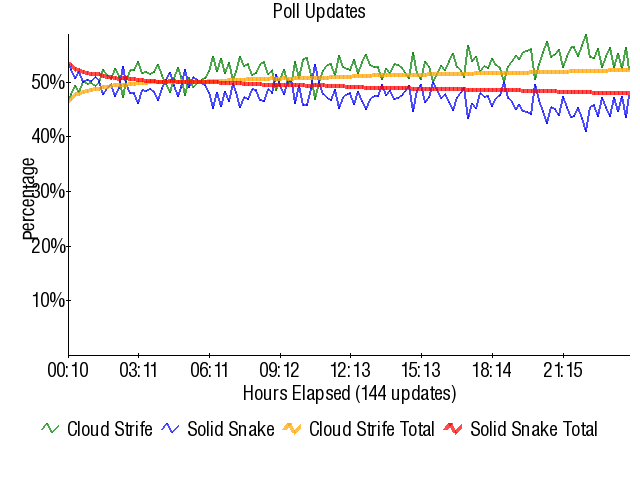 • Previous Match       • Next Match
Retrieved from "https://board8.fandom.com/wiki/(1)Cloud_Strife_vs_(1)Solid_Snake_2010?oldid=59325"
Community content is available under CC-BY-SA unless otherwise noted.