Cloud was supposed to get upwards of 82% in this match, but after Duke Nukem's picture was put on a milk carton for the match pic, how could you not vote for him? It was one of the single biggest acts of genius ever seen in the contests, and Duke rode the humor all the way to pulling an early lead against the Summer 2003 champion. It didn't last long of course, but seeing Duke benefit from having such a great match picture was fun to see, even if it only lasted a few seconds. Cloud went on to do quite well against Duke, and even managed to break 80% by the time all was said and done. However, Cloud did end up underperforming by over 2%. Whether this could be attributed to the milk pic or a genuine underperformance remained to be seen at this point, but if you extrapolated the strength of Cloud and Link after their first round matches, Link would be expected to win with around 53% of the vote.

It could easily be argued that Cloud not matching Link's level could be blamed on the match pic of Cloud's opponent, but theoretically, what would happen if Cloud underperformed, or did nothing more but meet standard expectations at best, while Link did better than expected in every single match? It may not have been something to watch after one round, but as the contest progressed, comparisons between Cloud and Link could not be helped. After all, the only character who had even a remote chance of stopping Cloud was Sephiroth, and there was literally no one on Link's side of the bracket that could touch him. If this contest wasn't all about Link/Cloud beforehand, it was painfully obvious that it was all about the two after this match. Cloud may have underperformed by 2%, but the fact of the matter is that he still scored 80% on a character who is able to get in the second round in many cases. No easy task.

It was easy to still defend Cloud after this match, but would the same be possible as the contest progressed? We would see. 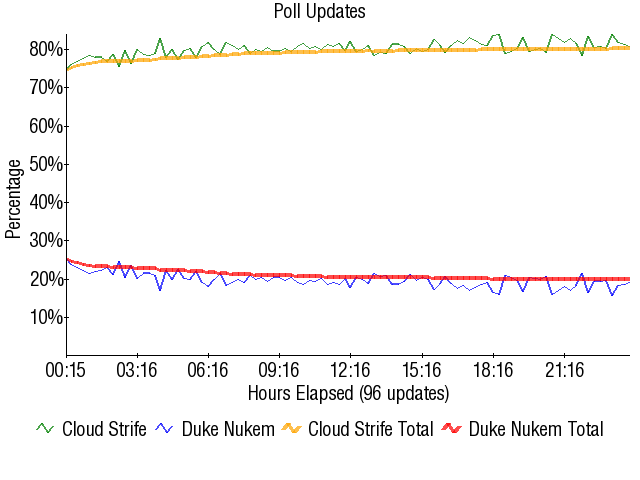 Retrieved from "https://board8.fandom.com/wiki/(1)Cloud_Strife_vs_(16)Duke_Nukem_2004?oldid=55818"
Community content is available under CC-BY-SA unless otherwise noted.