The only interesting thing about this match was the first five minutes. Like every other match involving Cloud, his opponent --- Samus, in this case --- jumped out to the early lead. But Samus, unlike the rest of Cloud's opponents, had the power necessary to hold a lead against him. Even though we all knew that Samus would eventually tank, it was fun to go crazy after her initial lead of 100 votes.

But of course, it lasted all of five minutes. As expected, Cloud easily withstood the early damage and eventually came back to score nearly 60% on Samus. But we all knew this would happen. The question here was whether or not Cloud was powerful enough to take down Link. Unfortunately for him, Cloud looked to be at a disadvantage. Throughout the entire contest, Link has had better prediction percentages, better vote totals (for the most part), and a better aura surrounding his matches. Link was shown no signs of weakness whatsoever, while Cloud has surrendered the early lead to everyone he has faced. The only advantage Cloud had whatsoever going into the finals was the fact that his match with Samus was the first in the entire contest to score over 100,000 votes. But aside from that one fact, the contest was Link's to lose.

Sadly, aside from the first five minutes, the only other interesting thing about the actual match between Cloud and Samus were the pictures. And why? Because both pictures were of Samus pwning the ever-loving hell out of Cloud. One pic saw SSBM Samus standing in the Fountain of Dreams preparing to let loose a Charge Beam right at Cloud's pasty FFT ass. In the pic that was supposedly of Cloud pwning Samus, we saw Ehrgeiz Cloud ripping apart Metroid Fusion Samus. But not only was Cloud suffering from the fact that no one gives a crap about Ehrgeiz, he was also suffering from Samus TJF. I mean damn, we got to se a suitless Samus!

Anyway, the finals were set, and *gasp* it was between Cloud and Link! Not that this wasn't set up from the start, of course. 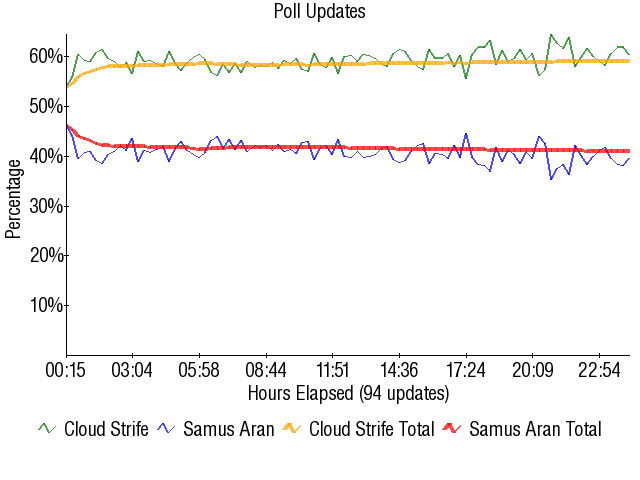 Retrieved from "https://board8.fandom.com/wiki/(1)Cloud_Strife_vs_(2)Samus_Aran_2004?oldid=55908"
Community content is available under CC-BY-SA unless otherwise noted.