Before I say a word about the match, is that not the single best match pic ever? That thing kicks all kinds of ass.

The poll looks close on paper, but aside from Sephiroth getting the small early lead, he was never in the match the entire day. Cloud went on to win by 4713 votes.

So in 2004, why not feed Cloud and Sephiroth a bunch of cupcakes in order to blatantly set up a match between them? After all, it isn't like Cloud and Sephiroth can gain or lose popularity separate from each other, right? Sephiroth should have a chance to not only take down Cloud, but Link as well!

Yeah, right. Another day, another boring match. Much like their bout in 2003, Sephiroth managed the early lead before tanking completely later, and Cloud went on to an easy victory en route to his imminent showdown with Link. But unlike a great deal of the other predictable matches in this contest, there was actually a good reason to debate this one. If half of 4713 people change their minds, Sephiroth could conceivably take down Cloud. Factor in that the majority of Boards 8 and 20052 can't stand him either, and you have a true trap match for Cloud. Picking Sephiroth to upset Cloud and/or Link was this year's most logical risk to take, but unfortunately, it simply did not hold true. In one day, we lost our one chance of seeing Cloud upset before the finals, the final perfect bracket, and we even saw renewed hope for those who picked Cloud to win the entire contest. Even though Link had clearly outdone Cloud for the majority of the contest, Cloud turning Sephiroth into a prison BLEEP during this match simply could not be ignored. The problem for Cloud were the total votes drawn in from both he and Link. Link was drawing more attention to his matches, which is all he really needed to take down Cloud this year. Link and Cloud may not have necessarily been about which character increased or decreased in popularity, but rather who showed up to vote for them in the match --- our contest in its purest form, in other words.

Even though Cloud won this match with ease, and even though I had Cloud in my bracket, I wasn't exactly thrilled to see Sephiroth roll over and die after taking the initial lead into the poll. I like both characters, but I like Sephiroth far more than Cloud. I find him to be the better character. Simple as that. Cloud's amazing, but he simply can't hold a candle to Sephy. At least not in my eyes.

After Cloud's dispatching of Sephiroth with ease, all we were left to think about was the fact that Link vs Cloud was right around the corner, and until Link's match with Mega Man, there was a slight chance of the match still being up in the air at this point. For Cloud to disappoint in nearly every match he has been in yet still kill Sephiroth is nothing to sneeze at, and Link needed a solid performance against Mega Man to show who the real favorite was. 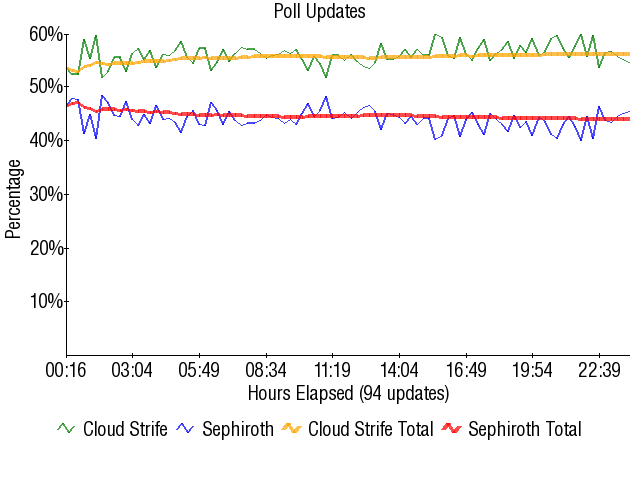 Retrieved from "https://board8.fandom.com/wiki/(1)Cloud_Strife_vs_(2)Sephiroth_2004?oldid=55902"
Community content is available under CC-BY-SA unless otherwise noted.