Given how bad Cloud's board vote always is, contrasted with how great Falcon's board vote always is, people were really looking forward to the first few seconds of this match. And it did not disappoint. Falcon had over 80% of the vote early and was over 40% at the freeze. He did of course drop later, but not as badly as one might think. 70-30 is a blowout, yes, but not many non-NN characters can claim to have broken 30% on Cloud. Ridley and Chris Redfield couldn't do it, and people considered those matches proof of Cloud's weakness.

Characters like Pikachu, Fox, Auron, and even Bowser have failed to break 30% on Cloud. Yet here we are, with Captain Falcon pulling it off. Cloud really is weakening, and 4ways might have hidden just how much of a drop he's really suffered. 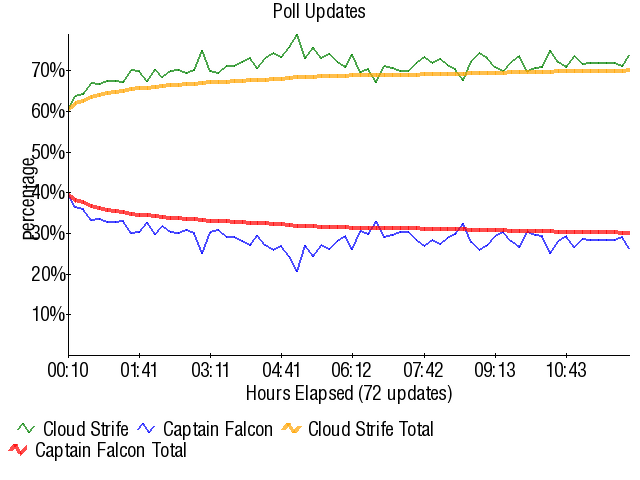 • Previous Match       • Next Match
Retrieved from "https://board8.fandom.com/wiki/(1)Cloud_Strife_vs_(4)Captain_Falcon_2010?oldid=59291"
Community content is available under CC-BY-SA unless otherwise noted.