What was once a match in which Vincent was a lock to beat Dante all over the poll turned into one of the funnier matches of the contest. After Vincent/Kerrigan, a ton of people kept overestimating Vincent to hell and back. Some even gave him a chance against Crono, all because he managed to beat the hell out of a character that had never seen in these contests before. And those who bothered saying that Dante would expose Vincent were.... treated rather badly, to say the least.

Not only did Dante come out and prove all of this overestimation wrong, but he put quite the scare into Vincent early on in the match. Much to everyone's shock, Dante took the fight to Vincent and come the first poll freeze, had a lead of 50 votes. Vincent was able to recover rather easily en route to one of the more consistent close matches we've ever had, but that first five minutes confirmed what a brave few men had been preaching for weeks; Vincent was not elite material, regardless of how badly everyone wanted him to be.

Vincent would eventually go on to hit 54% in remarkably consistent fashion, but even during Vincent's strongest times in the poll Dante was still finding himself winning spotty updates. Vincent may have won the match, but this was a moral victory for Dante through and through.

There are a couple of obvious reasons for Dante performing better than expected (or Vincent doing worse than expected; however you want to look at it), but I think none is more obvious than Devil May Cry 3. Critics say that DMC3 was a return to form for the series, and Dante rode a wave of new strength all the way to being a 1 seed come nomination time. Casual bracketmakers love their high seeds, as evidenced by Vincent being a bracket-buster despite most experts feeling that Vincent was a lock to win the fourpack.

Not only did this match throw Vincent's strength into question, but one could argue that Squall had a good chance at taking Vincent down come the divisional finals. Regardless of how you viewed that match, Vincent needed to hope that Dante increased by at least a percent or two in order to have a decent chance. And Vincent needed to hope that he would be able to either get around SFF or be the beneficiary of it. 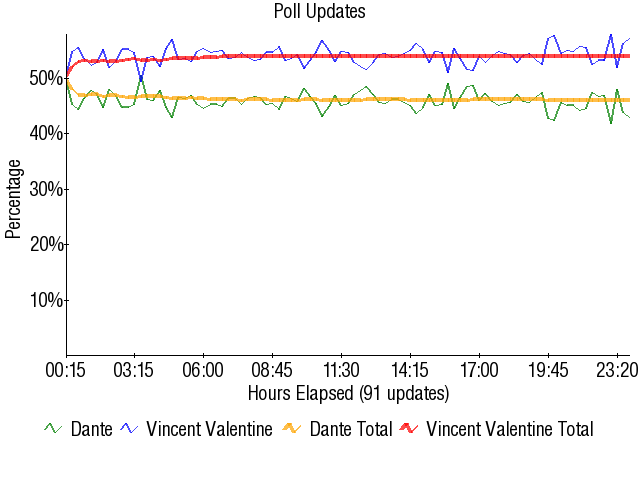 Retrieved from "https://board8.fandom.com/wiki/(1)Dante_vs_(5)Vincent_Valentine_2005?oldid=56108"
Community content is available under CC-BY-SA unless otherwise noted.