The Devil Division. If there was one division in this contest that was bound to screw everyone up, this was it. There were only three obvious matches in the entire thing, and they were all in the first round. Some would even argue that Dante/Terra or Vincent/Kerrigan weren't obvious, leaving Squall/Geno as the only true given in the entire division. Well there was also Magus/Knuckles, but.... yeah.

Dante/Terra caused a few minor debates pre-lockdown, if for no other reason than the hero:villain relationship generally not being close. In this regard, Kefka would be projected to score 41.62% on Dante according to 2004 numbers. Most hero:villain relationships are much wider than that. Another popular opinion for a Terra > Dante upset was how strong Final Fantasy 6 was in Spring 2004.

The issue with this is that Terra isn't the prototypical main character and wasn't very likely to be able to have a wide discrepancy between her and the main villain of the game. For starters, Terra isn't like a Cloud or a Squall; she has little to no appeal among casual voters. There's also the issue of Final Fantasy 6 being an ensemble cast, which means that even though Terra is the "main" character of the game, the attention among the party is divided up relatively equally among all the characters. In the case of FF6, that's a lot of characters.

This eventually led to Terra being far weaker than she would need to be to stand any chance in this match (she would have to be pretty close to Auron to be able to beat Dante, to put it in simple terms), and come show time, it wasn't close. Dante began the poll with well over 60% of the vote and never looked back; he was over 68% within minutes, and by the end of the match he was over 71.5%. Dante was remarkably consistent (see also: boring) through the match, but given the way some people hyped Terra as the next big thing, Dante's being able to beat her to a pulp with such ease and consistency makes one wonder how badly Terra was hurt by being in an ensemble cast in a Final Fantasy game. Her game itself is a strong one, but for whatever reason, the characters themselves don't perform well in these things.

Terra was another in a long line of new Square characters that never really had a chance to do well, and not only was she up against Dante in a 1-8 match, she was up against post-DMC3 Dante in a 1-8 match. This opens up a few interesting questions about how Kefka is the only character from FF6 that ever manages to do anything in these polls, and how a villain can be this much stronger than a main character. If you plug Terra into 2004 stats after this match, she only scores 34.24% on Kefka. That... doesn't make any sense.

On a side note, creativename has said time and time again that Shadow would be the strongest FF6 character due to him having the most appeal to the casual voter. In Leon's next contest, I say we make a Shadow push to see if creative is correct <_< 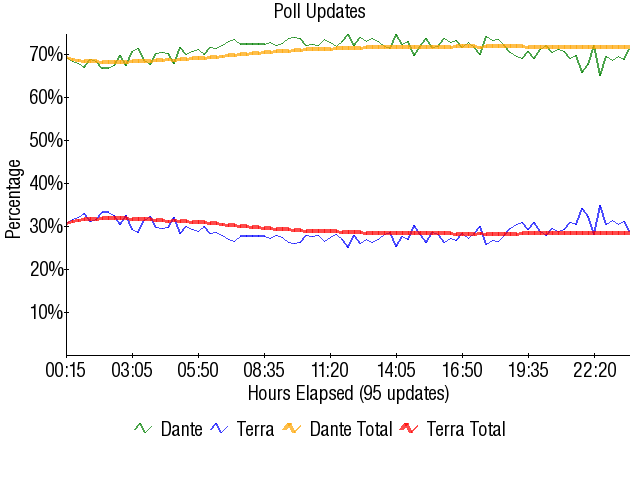 Retrieved from "https://board8.fandom.com/wiki/(1)Dante_vs_(8)Terra_Branford_2005?oldid=67783"
Community content is available under CC-BY-SA unless otherwise noted.