Earlier in this analysis I bashed Mega Man for constantly flopping. Sonic's turn to be in the sun, because after seeing Robotnik's choke job in the Spring 2005 Contest, one could argue that the only Sonic character to actually impress in these contests is Shadow the Hedgehog.

In 2002, three Sonic characters made the contest: Sonic, Tails, and Knuckles. Tails was up against Alucard in the very first round, and at the time, no one knew who the hell Alucard even was. Tails responds by losing in a match that he was never in, though it was close by 2002 standards.

Knuckles was next, and though he managed the first 80% blowout we'd ever seen, he turned around and proceeded to get killed by Solid Snake. It wouldn't be the last time, either.

That left Sonic, a massive board favorite to make the finals in a duel against Mario, as the only character in the field to give any sort of respect to the Sonic series. He responds by winning his first two matches easily before one of the most shocking meltdowns we've ever seen in one of these contests. Sonic struggled. Against Samus. Sonic was supposed to be a character capable of taking down Mario, yet he struggles with Samus. Not only that, but he lost a lead of 1500 votes within the final three hours.

Enter Summer 2003. Tails once again loses in the first round, and Knuckles is once again stuck in the same fourpack as Solid Snake. Knuckles is stuck facing Yuna first, and after the poll was deadlocked at a lead of 1000 votes for Knuckles for a few hours, Knuckles caught the day vote and won with ease. Again, he gets killed by Snake in the second round.

This once again leaves Sonic as the one character who could possibly bring respect to the series, but before we get to him, there was a newcomer to the contest field, Shadow the Hedgehog, who had to see some action. Plenty of people expected Wario to beat Shadow in that contest with ease due to the release of Wario World, yet Shadow completely maimed him en route to a second round match against Mario in which he not only refused to get killed, but nearly broke 45%.

What does Sonic do? He lands a good win over Ken in a 2-15 match, struggles with Zero, struggles with Aeris, and gets murdered by Cloud. Absolutely destroyed. They're still trying to pick up the pieces of Sonic that Cloud left behind in that match, and the only Sonic character to go out on a high note in 2003 was Shadow.

Enter Spring 2004. Only one Sonic game got into the contest, and instead of making its second round match against Mario World interesting, Sonic 2 decided to perform like absolute crap en route to a 70-30 loss.

It took Tails until Summer 2004 to get his first contest win, and it was a close one against Viewtiful Joe in the first round. It took until Summer 2004 for Knuckles to actually break 40% on Solid Snake, and this was after losing the early part of his first round match to Lettuce Kefka and needing the morning vote to beat him.

Oh yeah, Sonic. He decided to split the early part of his poll with Ryu 50-50, then in a rematch against Samus, Sonic completely choked. Again. Except this time he wasn't actually in the match and decided to simply roll over and kill himself. Once again, the only Sonic character to go out on a high note was Shadow. He lost his first round match by a mere 1400 votes, though some would argue that a loss to "Tee-dus" isn't exactly a high note.

I'm sure you can see where I'm going with this, so instead of wasting time ranting about how Robotnik completely laid an egg (hardy har har) in his match against Ganondorf, I'll simply slap up the "proper" Triforce Division seeding as per the Triforce results and let you draw your own conclusions.

Oh screw it, I'm trashing him anyway. Robotnik, like many a Sonic character before him, completely embarrassed himself by the time he exited the contest. Not that anyone actually expected him to beat Ganon in the first place, but Robotnik lost so badly that CATS... CATS... looks stronger in the Spring 2005 Contest than he does. That's nothing short of pathetic, and congrats to Ganon for making the rest of his division look like mere ants in his presence. By killing Robotnik the way he did, not only did we get to see yet another Sonic character look like a complete idiot, but he made the rest of his division look like an absolute joke in comparison.

And he did this with his ugly Wind Waker mug. I shudder to think how pathetic Robotnik would have looked (assuming he could have actually looked worse in the first place) had we seen SSBM Ganondorf in the match pic.

It takes a true talent to make CATS look like the third strongest character in a division. Congratulations, Dr. Robotnik, for making this happen and bringing further embarrassment to your once-iconic-now-niche series. 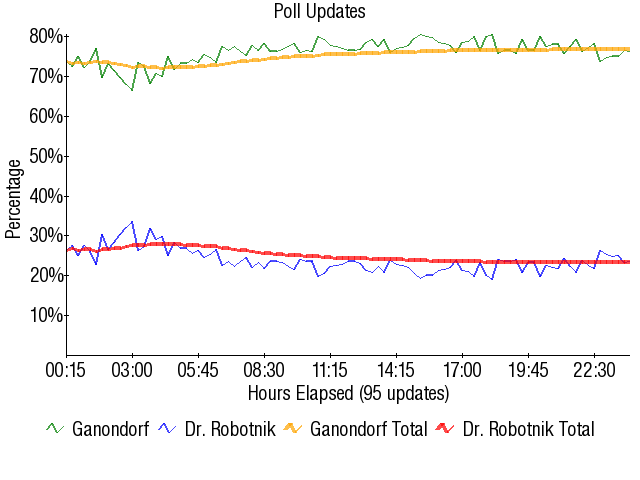 Retrieved from "https://board8.fandom.com/wiki/(1)Ganondorf_vs_(3)Dr._Robotnik_2005?oldid=55997"
Community content is available under CC-BY-SA unless otherwise noted.