And besides that little tidbit, it's RANT TIME. The character in the match picture was not Ganondorf; it was Ganon. If two different forms of the same character are allowed to be in match pictures for said character (Sephiroth, Link, and Cloud are other examples of this), then there is no reason whatsoever that Mega Man should be devoid of a Mega Man X picture in one of these things. After all, CJayC has already said that all forms of the Blue Bomber are essentially the same thing.

I know you're reading this topic, Ceej. Use a Mega Man X picture once in awhile.

Okay, so you're probably not reading the topic at all. Use a Mega Man X picture every once in awhile, anyway.

(Whether or not you believe the above parts of this analysis to be filler in an attempt to put some meat into an otherwise boring match analysis due to the match being pathetic and predictable is entirely up to you.)

Anyway, the match. After Ansem defeated CATS, albeit in dramatic fashion, Ansem was expected to clearly defeat Ganondorf. Ansem's victory over CATS plugged into the 2004 stats projected Ansem to defeat Ganondorf with 54.31% of the vote. However, when the match started, we were all shocked to see Ansem getting killed! SHENANIGANS.

Oh right, wrong 2004 stats. Anyway, aside from that one guy with the perfect who picked Ansem to win (what in the holy blue oblivion is a perfect doing picking Ansem?), everyone pretty much figured that Ganondorf was going to be a killer in this match, and a killer he was. The only thing you could really draw from this is Ganon doing worse than expected (everyone believed that Ganon would score at least 80% after seeing Ansem's struggle against CATS), but everyone was content blaming his underperformance on the pig pic and waiting for a different match to get excited about. That's.... pretty much it, really. Analyses involving pre-contest locks for the finals doing what they're supposed to tend to suck, but such is life. Work with me, people. Help me help you. Help me, help you. 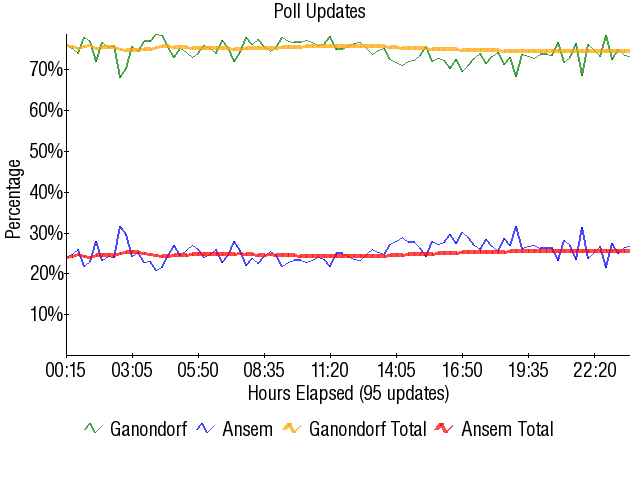 Retrieved from "https://board8.fandom.com/wiki/(1)Ganondorf_vs_(4)Ansem_2005?oldid=55987"
Community content is available under CC-BY-SA unless otherwise noted.