Before the contest, Wesker over Kefka was supposed to be a reasonable upset pick. After Kefka vs Mithos, Wesker looked like he had the match locked down. After Luca Blight vs Wesker, Wesker went from looking like a possible contender for the division to an absolute joke, and when the time finally came for his match against Kefka, it was officially confirmed.

For all the meaningless hype given to this match, Wesker didn't even bother showing up. Kefka flew past 70% of the vote when the poll started, and after Wesker made a minor push to get Kefka under 70%, Kefka recovered, got back over 70%, and proceeded to beat Wesker pillar to post for the rest of the match. Against nearly any other opponent, Kefka's percentage drops throughout the match. Against Wesker, Kefka started above 70% and stayed there.

Let me say this again, because even I don't believe it yet. Kefka scored over 70% in a match. The greatest picture Kefka could have ever gotten may be partly to blame for this, but Wesker being an absolute joke before this match ever took place was a large factor as well. Mithos, the effeminate villain of Tales of Symphonia, would be projected to defeat the main villain of the Resident Evil series if you solely look at their performances against Kefka. That's nothing short of pathetic if you're Wesker, and this match was arguably one of the best performances of the contest. Kefka took a hyped match and made a complete joke out of it almost before the match even began. All of Kefka's other opponents won the day vote on him, but not Wesker. Sad.

Next up for Kefka was the winner of Bison/Diablo, and Kefka getting to the divisional finals largely by default was a bit of an issue for him. His fourpack was nothing short of a joke, and his next match would prove whether or not he truly did have any strength. 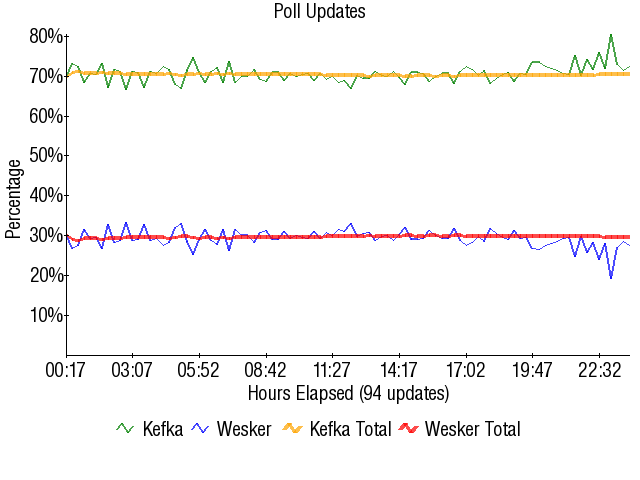 Retrieved from "https://board8.fandom.com/wiki/(1)Kefka_vs_(5)Albert_Wesker_2005?oldid=55983"
Community content is available under CC-BY-SA unless otherwise noted.