ATTN: All people who thought Diablo couldn't make a Starcraft-like run in this contest.

With that out of the way, this match was actually pretty good early on. The problem is that even though Kefka was able to quickly jump out to an early lead of nearly 300 votes, practically no one on the board throught that he would hold on for the win. Diablo smashed both Ridley and M. Bison with the day vote, and given that Kefka was quickly stalled by Diablo after the board vote wore off, practically everyone knew what was coming next; sure enough, Diablo was able to stall Kefka and begin cutting into his lead. Kefka tried his best to hold Diablo off, but attempting to postpone the inevitable rarely works. Diablo caught up to Kefka at 8 AM, and Kefka barely made any effort to prevent Diablo from running away with the poll. This would have been somewhat unexpected had we not seen Diablo do the exact same thing to Bison one match prior, and by the time the match was over, a close match early became a laugher late. And since Ganondorf was a lock for the Final Four already, we had some interesting info regarding Diablo.

With the exception of Mega Man, Diablo is the only non-Square, non-Nintendo character to ever make the Final Four. The prediction percentage of 14.76% is also the lowest we've seen since Starcraft vs SSBM in Spring 2004. Diablo may have had little chance against Ganondorf in his next match, but he made quite the run in this contest en route to stealing his division away from everyone else in it. The only question remaining was whether or not Diablo was the strongest character in a group of rats, or the strongest character in a group of legitimately strong characters. 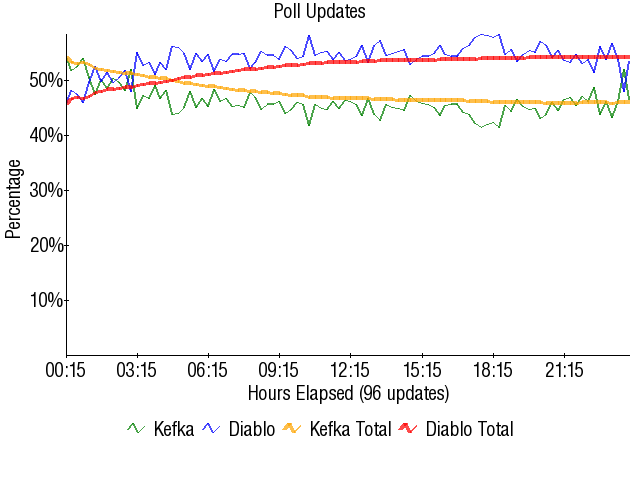 Retrieved from "https://board8.fandom.com/wiki/(1)Kefka_vs_(7)Diablo_2005?oldid=55995"
Community content is available under CC-BY-SA unless otherwise noted.