Before this contest began, Tidus was considered to be the overwhelming favorite by the board to win this match. To give you an idea of this, Slowflake’s Board Odds Project had 127 brackets picking Tidus to win, as compared with only 24 brackets with Kirby. However, their first round matches put this “foregone conclusion” into doubt. Kirby tripled Final Fantasy IV hero Cecil. In spite of the completely unrecognizable picture Cecil got, this was very impressive. Tidus followed that up with a mediocre performance against the King of All Cosmos, netting only around 72% in that match. People began to acknowledge that Kirby definitely had a fighting chance of winning this match, but that still did not prepare us for what would happen.

The match started and Kirby jumped out to a big lead right off the bat. He had a 100 vote lead in merely two minutes and had over 59% at the first poll freeze. Tidus managed to bring the percentage down a bit during the night, but once morning hit, Kirby absolutely exploded, pulling in nearly 60% on a regular basis. Another match in the vaunted “gauntlet” had turned into a blowout of Ultimaterializeresque proportions.

After pulling in 49% against Ganondorf, Tidus has been in a huge downward spiral. He got obliterated by Mega Man in 2004, and this match added to that “legacy.” If you want an idea of just how pathetic this performance was, just take a look at this poll:

Tidus only did .01% better against Kirby than Ramza Beoulve, the lead of Final Fantasy Tactics. This also turned out to be a match where the casual bracket makers owned the board, as well over 50% had Kirby advancing to the finals of his division. This match also threw another strike against the so-called “20XX Factor” from 2004, as the stats predicted the match against an unadjusted Tidus within half of a percent. 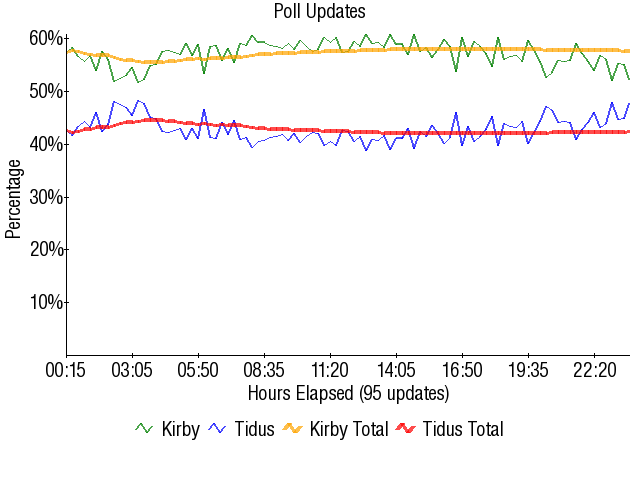 Retrieved from "https://board8.fandom.com/wiki/(1)Kirby_vs_(4)Tidus_2005?oldid=56100"
Community content is available under CC-BY-SA unless otherwise noted.