So here we were, waiting for the match between Link and Cloud, the match that was set up from the beginning, to play out. These two had a minor history between them, but it was a history nevertheless. 2003 was supposed to be the year of Link. He dominated in 2002, and for most of 2003, he showed the same dominance. But in the Final Four, he ran into the buzz saw that was Cloud's championship run. Link managed a minimal early lead after the first update, but he would not lead again for the entire match. Cloud jumped on Link after the first update was over, and even though Link fans were claming that there would be a comeback for the entire day, it was not to be. The best that Link was able to manage were a few minor, meaningless update victories through the match. Cloud's victory was never in doubt through the entire day, and he wound up winning the highest-scoring contest match of all time by the final of 76199-71438, a vote difference of 4761. A ton of records were broken in that match, but above all of the numbers was the fact that Cloud not only stood up to the heavily favored Link, but defeated him. Whether it was the Wind Waker pic, Kingdom Hearts, a mass of vote-stuffing, or any mix of the three, the bottom line was that Cloud upended Link in 2003.

With two characters clearly ahead of the pack, why not set them up for a reunion by placing them on opposite sides of the bracket? It isn't like anyone else was about to take them down. The two of them took care of their business despite comparisons being made between the two after every match, and even though Link was the clear favorite going in, the two still had to play out the match. And this year, there were no excuses for Link. Eight different match pics were featured in these finals, and Wind Waker Link did not appear in any of them. This is simply a match decided by the names, not the pictures.

Unfortunately, Link confirmed what was seemingly obvious all along. He was the dominant character of the 2004 contest after the first match took place. Like every match involving Cloud, Cloud's opponent took the early lead. But in this case, Link was taking in nearly 75% of the vote early on. Cloud rebounded quickly, but not after Link managed to build his lead to over 200 votes. Cloud's rebound began soon afterwards, but it was so God-awful slow that even those supporting Cloud wondered whether or not he would be able to not only come back, but survive the legendary Zelda day vote in the process.

After Cloud spent the next few hours trimming Link's lead down to 40, we got our answer. Cloud looked like he was going to come back against Link and claim the lead for his own, but Link caught absolute fire with the morning vote. What was once a match going in Cloud's favor turned into an absolute rout in the favor of Link, and before Cloud could even blink, the match was completely out of reach. The only thing left for Cloud to do was to hold off Link from beating him by more than 4761 votes. Thanks to a minor push late in the match, Cloud managed to do so and preserve a moral victory, albeit a Pyrrhic one. And despite this, Link still managed to defeat Cloud with a higher percentage than what Cloud scored on Link in 2003.

How did this happen? Simple. Link went up in strength. It was painfully obvious to see after every single match Link was involved in, and those of us denying it were only trying to convince ourselves that Cloud stood a chance. At least, that was my position. I felt in my heart of hearts that Link would win the contest after he beat CATS the way he did, but I kept telling myself that we didn't know what would happen until the finals. Well, the finals have come and gone, and Cloud got his ass kicked. Link went up, plain and simple. As for why it could be any one of a hundred things. Maybe the E3 trailor made a difference. Maybe KHF wore off a little. Maybe the fact that both Board 8 and the FF7 crowd loathe Cloud had something to do with it. Or maybe, just maybe, Link was the better character in 2003 after all, and was simply handicapped by his Wind Waker pic. I never waivered from my belief that a Link with adult pics could ever lose on this site, and I stay by that even today.

I will, however, tip my hat to Cloud. Despite Board 8 and the Final Fantasy 7 board absolutely hating him, Cloud withstood the initial onslaught and brought the match to within 40 votes before the day vote gave Link the win. That has to mean something. 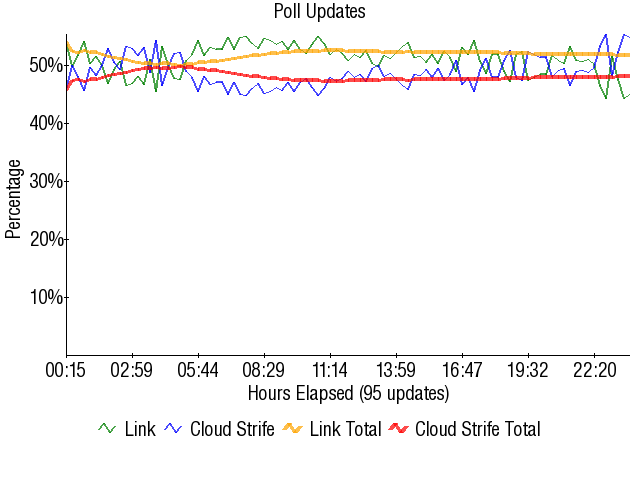 Retrieved from "https://board8.fandom.com/wiki/(1)Link_vs_(1)Cloud_Strife_2004?oldid=55910"
Community content is available under CC-BY-SA unless otherwise noted.