Hmm, Link beating Cloud late in a contest where Link gets a percentage in the low 50s and Cloud something in the high 40s. Seems oddly familiar somehow....

Only 2008 deviated much from this, but Crono was dragging Cloud down in that final. If you look back on this history, Cloud's win over Link in 2003 is as big or bigger a miracle than Mario's win on Cloud in 2002. Kingdom Hearts and a match picture doesn't explain that match anymore, especially given how easily Link gets past everything else.

Come 2010, it was the same ending as always. Link > Cloud, with a percentage close to what we've seen so often before. People were none too happy with Cloud beating Snake, but the LINK ALWAYS WINS anger trumps even Cloud's anti-votes. As a result, Cloud did far better than people expected. The Oracle expected Link to get at least 57% here, and many people even had him breaking 60%. So even though Cloud got rocked as expected early, he made an excellent percentage comeback to make the final respectable. It's also amazing how these two still bring in so many votes.

That said, this was a disappointing final. Link-always-wins hate being so huge that Cloud of all people benefits is a pleasant surprise, but that's not the point. Cloud making this match as close as he did was not a good thing, because now it's harder to make the case Link needs to be removed. But make no mistake. He needs to get taken out of the field. His only two losses, ever, involved Celda and the entire internet ganging up on him. To make a good bracket, you need to have all the good matches on the side of the bracket Link isn't on. At least one third of people will always pick him to win and bracket vote accordingly. This is a huge problem. It's time for Link to go.

Cloud doing well in the final is almost irrelevant, since he's clearly weakening. Snake could have a legit shot at beating him even next year. But Link? He'll never lose a match again without insane joke/bandwagon support. And that is a huge, huge problem. He's the anti-fun. It's time for him to get the boot and be the super secret final boss at the end or something. Bring back the Tournament of Champions, Battle Royale, whatever. Having Link in the main field doesn't work anymore.

What's sad is Link will still get the most nominations next year, even though no one on Board 8 bothers with it and everyone knows he always wins. 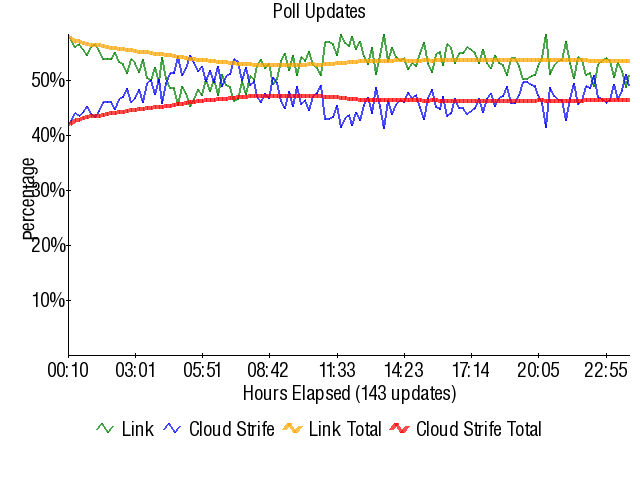 Retrieved from "https://board8.fandom.com/wiki/(1)Link_vs_(1)Cloud_Strife_2010?oldid=61460"
Community content is available under CC-BY-SA unless otherwise noted.