If there was any doubt about Mega Man having no chance to take down Link prior to this match, how about looking at the results from the match itself? While Heroic Mario got his chance to laugh at everyone in the stats topic after his Mega Man/Tidus prediction was spot-on, I got my revenge here in the Final Four. I theorized that Link would be able to take down Mega Man and get over 65% of the vote, and I was laughed at mercilessly for it.

Funny how actual match results can change things. Link not only had little trouble breaking 65%, but he doubled Mega Man with ease. The same Mega Man who set blowout records in 2002, who came stunningly close to taking down Sephiroth, was now reduced to being killed by Link. The obvious explanation for this would be SFF, but we can't ignore the fact that Link may very well have gone up over the past year. Maybe Link not getting Wind Waker pics does have a positive effect. Maybe the E3 trailer did make a difference for Link. Maybe Link is one of those characters who can benefit from the absolute slightest of exposure. There was definitely a certain degree of SFF in this match, but to be honest, I feel that Link's rise in strength had more to do with this than the SFF itself. Mega Man simply doesn't get killed like this on the back of SFF alone, even though we had a serious warning sign from Zero earlier in the contest.

But don't let this match fool anyone. Mega Man is still a strong character capable of doing real damage in these contests; he simply ran into a nuclear weapon in this match. Link is just that damned good. This is the Link that we all thought we would see last year, but he was handicapped for whatever reason, be it Kingdom Hearts, his Wind Waker pics, or a mix of both.

For a true personification of the power of Link, you don't need to look at the finals. Look at this match. Two thirds of all brackets entered had Link in the finals. TWO THIRDS!! After zero brackets, joke brackets, favorite brackets, and everything else, over two thirds of everyone entered had Link in the finals. Add in how easily Link doubled Mega Man, and this contest was pretty much over after this match. It would take a small miracle for Cloud to win, and despite Cloud doing as expected in every match thusfar, "as expected" simply isn't good enough to take down a Link not handicapped by Wind Waker pics. Even if Cloud were to break 60% on Samus, that still may not have been good enough for him to take down Link. After all, look at what Link did to Samus and Mario in the past.

Oh yeah, one final word about this match. For the final three matches of the contest, we were treated with .php pictures --- in other words, multiple pics per match! For the Final Four, there were two pics per match. Each character was given a pic of themselves flat-out pwning the living hell out of the other character. In this match, we saw Marvel vs Capcom Mega Man blasting the hell out of LTTP Link, and in the other picture, we saw Adult Link holding his sword to Mega Man's throat as the Mega Man 7 version of Mega Man was lying on the ground. Amazing work by CJayC, if you ask me. 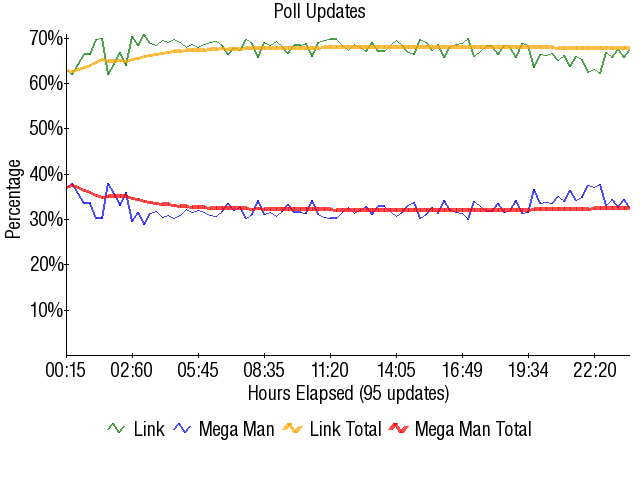 Retrieved from "https://board8.fandom.com/wiki/(1)Link_vs_(1)Mega_Man_2004?oldid=55906"
Community content is available under CC-BY-SA unless otherwise noted.