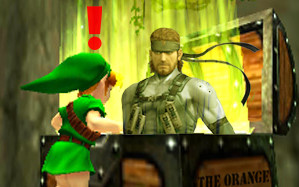 This poll was never really in doubt for Link despite all the cuts Snake made along the way, though it was Allen's way of giving a pittance poll to GameFAQs after clearly siding with Reddit for the entire contest. Granted Reddit didn't really see it that way and thought it was just GameFAQs needing to see Link win something to have any closure, but those people aren't exactly known for reading comprehension. Most people who followed this contest wanted Link to lose, including a lot of people who didn't care much for the rallying. Reddit's attitude was the issue.

Regardless, this match did prove one thing: if you run a poll with Link, Solid Snake and Samus (or Mario) as the three entrants, Solid Snake wins. I'm also of a mindset that Link did actually get a revenge boost in this poll after what happened with Draven, and that Snake could probably challenge Link one on one these days under more normal conditions. Not that this contest was anything closely resembling normal.

What wasn't mentioned in this write-up is that this bonus match was originally scheduled to be Link vs. Draven (through a series of polls that I ran on Board 8), but Allen allowed Board 8 to vote for several alternative bonus match ideas after an r/LoL mod stickied a new rally topic following all of the attempts to sabotage the Draven rallies. When this mod-endorsed rally allowed Draven to put Snake away for good, that was when Allen showed up to let Board 8 vote on the bonus match. Reddit actually attempted to sabotage the Board 8 only poll that Allen put up in order to get a Link vs. Draven match, but Allen finally put a stop to that by closing the poll and choosing Link vs. Snake as the official bonus match. -Luster Soldier

Allen did the right thing and gave us Link vs Snake, which may seem silly for people who weren't here in the 2013 season, but at the time Snake > Link was the "cool" upset pick everyone was pushing. I will actually admit there was potential for it, but Link was just too strong and probably will be too strong forever. The dude is just a vote magnet, and now with Breath of the Wild beneath his wings he will most likely dominate the 2018 season unless there is some major structural change or gimmick introduced.

Still, Snake performed admirably here, and if he were still getting games regularly he might stay near Link's level even post-BotW, but unless my prediction comes true and the Martyr Factor plays a role in his strength, we will probably never see Snake come this close ever again.

I really don't have much else to say about the bonus matches, they were super vanilla. Hopefully Luster has the other potential matches written down somewhere.

Thanks for contributing to this thread, everyone. It's good to see all of us so passionate after such a long drought (Best Year doesn't count). I want to see every one of you on the leaderboards this year! <33

Retrieved from "https://board8.fandom.com/wiki/(1)Link_vs_(1)Solid_Snake_2013?oldid=82204"
Community content is available under CC-BY-SA unless otherwise noted.