It's funny how spoiled we are. We're so used to hilarious blowouts from contest titans early that Link falling 0.19% short of 80% on Thrall is somehow a disappointment. Some math can probably be done with the Thrall/Vergil fourway match to show Link's exact underperformance here, but it doesn't matter because fourways are a joke. 1v1 is a whole different animal, and this was our first legit 1v1 in four years. A few percentages were bound to change in that time.

That said, Link had to deal with early anti-voting early in all his matches this contest. As popular and strong as Link is, people are truly getting tired of him winning all the time. It's not as loud as "WAAAH FF7 ALWAYS WINS", but it's there. Just look at the 2007 final. Link stayed extremely consistent trend-wise throughout this entire poll, and didn't really go up all that much with the morning vote.

This meant two things early on in this contest. The old trends we all knew were getting thrown out the window with matches only being 12 hours. Second, we had officially entered AntiBlowoutFAQs. The days of Zelda 1 scoring hilarious blowouts on Adventure are long gone. Because with the play-ins, the lower seeds are all tempered first. So now the higher seeds all go up against someone that's already won something, while the true joke characters get to have decent seeds and face characters like Ike, Zidane and Captain Falcon. 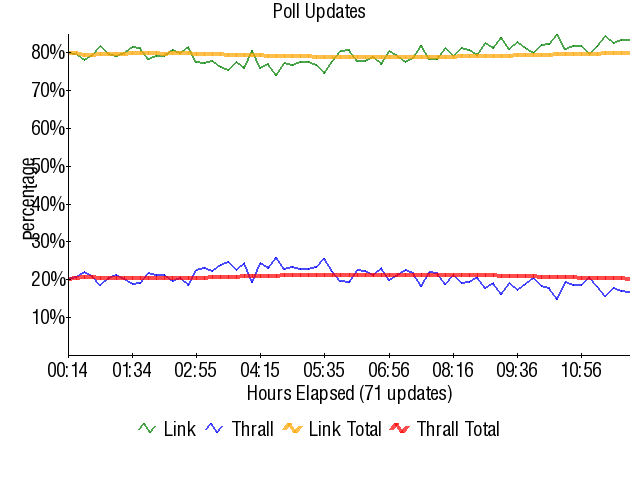 Retrieved from "https://board8.fandom.com/wiki/(1)Link_vs_(16)Thrall_2010?oldid=60839"
Community content is available under CC-BY-SA unless otherwise noted.