As a match, this only mattered for about 30 minutes. Yoshi tried resisting the SFF to upset Raiden, but there was no way he was going to stand up to Link for very long and Raiden was able to easily win second place.

The only thing actually worth discussing here was the outline for the pictures this round, which was.... the quote contest finally happens! This outline was pretty sweet, though the idea for yearbook photos was really stupid. Just have normal match pictures with quotes underneath, not yearbook portraits. This was Allen trying to be cute and handicapping himself, which would raise holy hell later on in round 2.

Also, even had Draven never happened I'm convinced Link does not win this contest. His match in round 1 got 28930 votes, and this one got 27732. X-stats and all that are only a part of a character's strength; you have to look at putting asses in seats, and Link generated no buzz this year whatsoever. He would have made the final had he managed to beat Draven, but Snake would have won easily. This contest really showed that people are tired of Link winning all the time. He has lost a huge step, and the low vote totals for both of his normal matches proved it.

new round, who dis?

With a new round comes a new pic theme, and like previous contests, Round 2 was the "uncomfortably close face pictures" round, which I despise. I don't want to see the pores on Link's face, thanks. That's my personal taste though, and as a result I am absent completely in Round 2, but there are some standout pics (lol vincent) we'll talk about when we get there.

As for the theme itself, it was pretty divisive, but unlike my dumb Atlas Hale pic, at least the gimmick doesn't get in the way of seeing what you're voting for. It's not bad, I like the idea, it gives the "big dumb faces" theme more of a meaning, and for once Allen was looking more for upper torsos to go along with those dumb faces so that we didn't get shit like this: 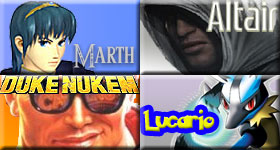 That Duke pic is simultaneously incredible and the worst pic ever in a contest (lol vincent). I did that Lucario pic and I was so stoked I got the "o" inside his kamehamaha. Much simpler times in Picsmithing.

The quote part of the yearbook pics derived from the bios written by Board 8 themselves. I actually think I wrote Draven's bio because nobody else wanted to. Anyone remember what bios they wrote? Also, I'm not sure if we submitted the quotes or if Allen did those himself, but we definitely did the bios for everyone but the 1-seeds.

I'm talking so much about the pics because this match was a real snoozefest. People argued whether or not Yoshi could overcome the Link SFF to lock down second, but, y'know, it's Link. Maybe if a lesser Nintendo character were in the match. Raiden was able to take silver pretty easily.

Retrieved from "https://board8.fandom.com/wiki/(1)Link_vs_(6)Raiden_vs_(9)Yoshi_2013?oldid=82194"
Community content is available under CC-BY-SA unless otherwise noted.