That pic sure does give a microcosm to the rivalry that these two have, because even when on opposite sides of the bracket they seem to always be on a crash course for one another.

You all know the story by now. In 2002, Crono goes in as the huge underdog against a hated Mario, comes back from down 1000 and has 400 votes taken from him by CJayC in the final minutes. In 2003, Mario comes back from down 850 in the final two hours. In Spring 2004, Chrono Trigger beats the hell out of Mario RPG, Mario World and Mario 3. In Summer 2004, Crono gets his revenge by finally beating Mario in a match with ease. The final margin of victory was over 6000 votes.

In the overhyped Mario/Crono IV, however, there would be no CPR finishes. In fact, the match was over within minutes. Mario struggled a bit early on and was only able to lead by a few hundred votes, but once the morning vote hit he flat-out murdered Crono en route to winning by almost 8000 votes with minimal resistance. In the span of one year, Mario turned a 6000 vote loss into an 8000 vote win, and given that Crono isn't getting a game any time soon it seems as if this little rivalry is closed once and for all; Crono has no real way to increase outside of a CT remake, while Mario is still putting out games.

And that's what this contest was all about -- a celebration of Mario's greatness. Not only did Mario win this contest, but he did so with extreme ease. Like Link, Mario is still putting out games and increasing in strength. Not one character that stood against him came close to beating him, and this contest was over the second he beat Samus as far as I'm concerned. Yes Mario is a paper champion who only won because Clinkeroth wasn't in the main bracket, but who's counting? <_< 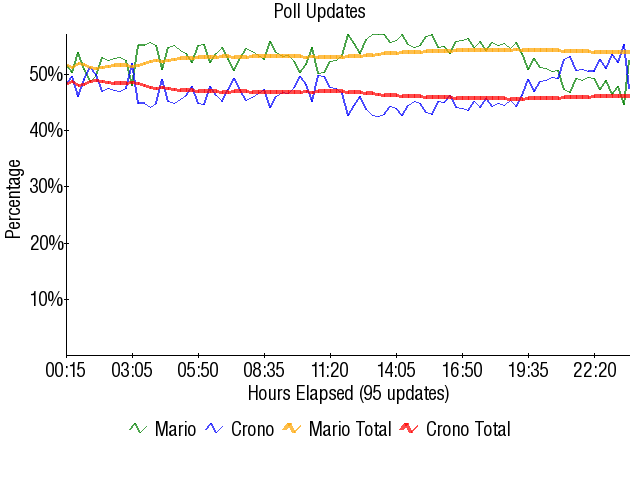 Retrieved from "https://board8.fandom.com/wiki/(1)Mario_vs_(2)Crono_2005?oldid=56148"
Community content is available under CC-BY-SA unless otherwise noted.