First and foremost, I have to say that that is one of CJayC's all-time greatest pieces of artwork. What many of us thought would be the sprite round became the polygon round, and it looked like CJayC was taking the extra effort to make up for what many people thought was a very lackluster second round of pics (most of the match pics were simply the first round character portraits zoomed in).

As for the actual match, there was minor hype going into it involving how well Zero could potentially do. LordOfDabu even had Zero winning, IIRC.

The main case for Zero is that this was finally his big chance to validate his strength. He had done very well on Sonic in 2003, but was hidden behind the insane 20XX Division in 2004. Here in 2005, he was up against Mario and was expected to get around 45%. Some even felt that Zero would surpass 45% en route to possibly even giving Mario a scare.

Mario put all of this to rest within literally seconds, as he turned a mildly debated match into an SFF beatdown within seconds of the poll's opening. There were only three ways to look at this. Either Zero was overestimated, Mario was underestimated, or this was a case of Zero getting hit by the SFF bug.

Those hoping that either Samus or Crono would be able to take down Mario were given a ton of doubt after this match. It was clear that both Mario and all the casual brackets supporting him meant business in this contest, and it looked more and more that both Mario and Nintendo as a whole was on the rise. And if Mario was seemingly able to SFF Zero with ease, Samus had all of one day to go out and prove that she could SFF Ganondorf. If she couldn't, she was in for a world of hurt come the fated Elite 8 matchup with Mario. Either that, or Zero was simply overrated to such epic proportions that this match was simply his true colors finally coming out. 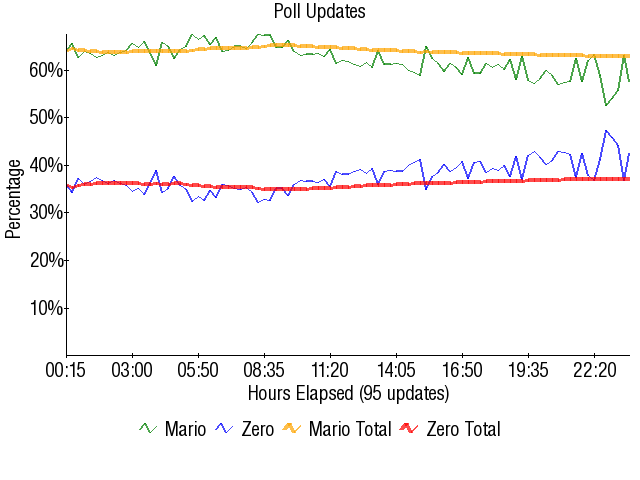 Retrieved from "https://board8.fandom.com/wiki/(1)Mario_vs_(3)Zero_2005?oldid=56120"
Community content is available under CC-BY-SA unless otherwise noted.