For those of us who expected a mere doubling by Mario in today's match before the contest started, do keep in mind something important: CJ lost. Once Ness pulled the big board upset, everyone changed their minds and looked towards a huge SFF-spree by the King of Nintendo himself. Afterall, Bowser SFF'd Ness to a large degree in 2k3; what would keep somebody from thinking Mario couldn't do the same? Ness has only been in three games in all of his existence while Mario puts out, what, three Mario games a year? It doesn't hurt Mario that he's in the two most popular games Ness is in, either.

With a win like this for Mario, he's aimin' to please the majority of the casual bracket-makers (that is, if the Top Fifty's general consensus is a sign of anything). Ness, who made the GameFAQs 2005 Game of the Year's leading character look worse than Jak (and Ness had starmen.net linkin' to Ness/Jak, whereas he didn't in Ness/CJ), now looks worse than Joanna Dark and Servbot. To add to it, Mario SFF'd Ness more than Mario SFF'd Donkey Kong in 2k2 (DK had 18.03% against Mario). It's hard to gauge Mario just yet though; afterall, he faced one new-comer and SFF'd somebody who we have nothing but shaky readings on. Mario now moves on to face the winner of Zero/Lloyd next round, making it one round closer to the Mario match we've all been waiting for.

As a fun lil' note, this might be the second time in a row that a GTA:SA character ranks at the last position possible in the x-stats. There is no doubt that Board 8 rejoices over the idea of such. 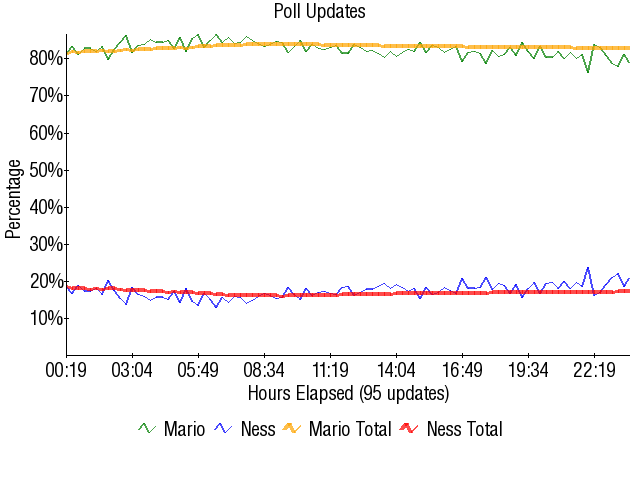 Retrieved from "https://board8.fandom.com/wiki/(1)Mario_vs_(4)Ness_2005?oldid=56088"
Community content is available under CC-BY-SA unless otherwise noted.