The first match is almost never about who wins. We always know the answer. It's about vote totals and setting a trend more than anything else, and though Mario's expected drubbing of Joanna Dark didn't pass 100,000 votes, it was still a fairly decent increase from the vote totals we had seen since CNET's wonderful idea to redesign the site. This was likely due to the Gamespot advertisement (which caused a major stir, especially since the banner was still there on Gamespot's homepage after the contest started; people thought that Gamespot's casual bias would "ruin" our contest), but more voters is never a bad thing.

Trend-wise, one could almost make a case for Mario looking pretty damn strong after Joanna getting her ass whipped. Joanna only did 2.65% better than JC Denton did on Mario in Summer 2004, and I don't personally think that JC Denton is even in Joanna's league. As 1000 people would know what game JC Denton is from without showing them a picture. Less than 50 will be able to answer you, and showing them a picture would only net "Enter the Matrix" answers. Joanna is a fairly well-known character from the quasi sequel to Goldeneye, and her game went 50-50 with SOTN for a very large part of their match. Ngamer may have had to go through hell and high water to get Joanna into this thing, but it's not like people don't know who she is. Perfect Dark is a very accomplished N64 title that sold over a million copies; and "despite" only a million copies, most people know what the game is. Even better is that Perfect Dark will soon be moving to the Xbox, so expect possible appearances by Jo in the future.

But either way, either Mario kicked Joanna's ass legitimately, or Mario SFFd her a little bit. Either way, with Clinkeroth gone, Mario was seemingly the character with the highest number of picks winning the contest. Statheads will say that Samus was the odds-on favorite, but as you'll see once this analysis gets going, the casual bracketmaker flat-out kicked Board 8's ass time and time again.

Two small things to note about this match before moving on. One, auto updating was still around during this match. The stats topic loves long chains of zeroes, and there were thirteen posts in a row of people posting a score of 80094-18906 (= 99000 votes) within 19 seconds. Secondly, the voting technically didn't close after the match ended. Votes could still be cast in the match for a few days after it closed, and despite a few efforts to get extra votes into the match for the sake of it hitting 100,000 votes, the overall total only got an extra 50 votes or so.

Overall, not a bad start to a contest. But then again, the first day of EVERY contest is good. The true test would be later on, and whether or not this contest could stack up to the rest in GF history. 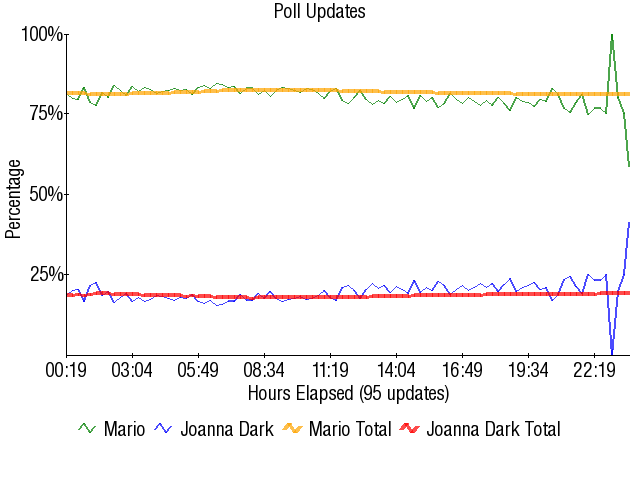 Retrieved from "https://board8.fandom.com/wiki/(1)Mario_vs_(8)Joanna_Dark_2005?oldid=56016"
Community content is available under CC-BY-SA unless otherwise noted.