After the Flood Division turned out to be relatively surprising in that it gave us two of the most exciting matches all contest, it was time for Crono to go out and take the division in what was seemingly a predetermined final. We all knew Crono would win handily, but this match was more about Master Chief validating his strength than anything else. He may have been underrated in 2003, but overrated in 2004.

And while this match may not pin down Chief to an exact value, it did prove that Chief is one of the least transitive characters in this contest. Some people will vote against him regardless of who he faces, while others will vote for him regardless of who he faces. This poll was a great example of this. He was Master Chief up against one of the characters heavily favored to win the entire contest, and he did the same thing that he has been doing for two years now.

At the beginning of the poll, Crono was near having 70% of the vote and flying pretty high with his intake. But not only are Chrono Trigger characters bad during the day, Xbox characters thrive during this same time frame. And though Master Chief had no chance of winning this match whatsoever, he put on quite the show once his fans showed up. Come Chief's historic day vote, Chief pulled Crono down from being near 70% all the way down to what you see in the poll result. Crono never managed to recover with the second night vote either, as Chief's slice into Crono's percentage was quick and constant throughout most of the latter stages of the poll. And while Chief didn't win any updates in the match, he came close on a number of occasions, oft scoring updates in the 48% range. It was quite a show by Chief, and almost a moral victory.

It was also a victory for statheads, because assuming Chief stays relatively consistent with this pattern it's possible that his final value for this contest would be far more accurate than what we've had on Chief in the past. Chief may have overperformed based on seeding, but it's doubtful given CT's popularity on the site.

The only question that remained was whether or not this match showed that Crono was in trouble in this contest. One would have to assume that he would get past the winner of Vincent/Squall with relative ease, but would Sonic, Mega Man or especially Mario perform this badly on Master Chief? It's difficult to say, but it was tough to imagine Crono winning the entire contest after watching this match. 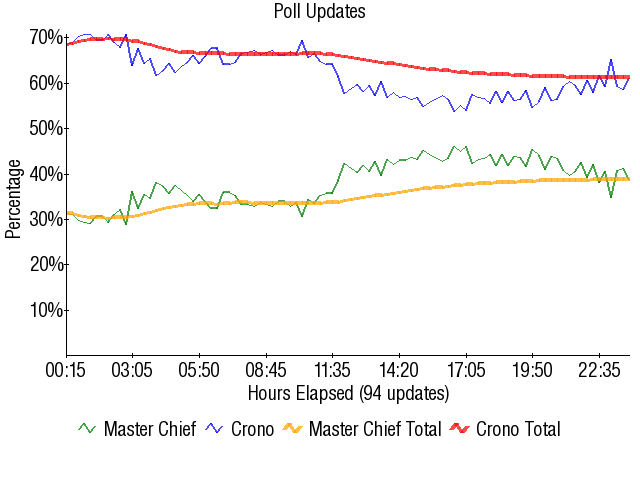 Retrieved from "https://board8.fandom.com/wiki/(1)Master_Chief_vs_(2)Crono_2005?oldid=56128"
Community content is available under CC-BY-SA unless otherwise noted.