When this contest first began, the Flood Division was arguably the most boring of them all. There was one match that was expected to be interesting, and that was little more than a one point first round match that barely mattered in the grand scheme of things.

Yet the very day after the fabled gauntlet proved to be a gigantic string of overhyped matches, we were treated to arguably the best type of close match there is: the unexpected.

People joked around constantly about how Donkey Kong beating Master Chief would be hilarious, and even though some people expected Donkey Kong to perhaps take the early lead in the match, few thought that he had any chance of actually winning. I mean, it's..... Donkey Kong. He's the master of having close matches that never should have been close. He almost lost to Aya Brea. His game almost lost to Duck Hunt after being up by 3400 votes. And against Tommy Vercetti (a match in which he was actually the underdog), after falling behind early and coming all the way back to tie, Donkey Kong choked under the pressure of bracket voting at the end of the match. And let's not forget how Donkey Kong was completely pasted by Vivi despite arguably being the favorite going in and having 70% of brackets behind him.

So how was Donkey Kong, effectively little more than a giant (Literally!) choke artist, supposed to hang with Master Chief in the year of Halo 2's release?

"But that's... why they play the games." -Chris Berman

A lot of people figured that Donkey Kong would take a slim early lead on Master Chief, and that he did. He jumped out early, and after a small Chief rally got the match within ten votes, Donkey Kong had a lead of 36 at the first poll freeze. This was fairly expected, but what wasn't expected was that DK would continue to increase his lead with minimal resistance. As update after update rolled in, Donkey Kong's lead increased by more and more, to the point where some people actually began giving Donkey Kong a chance at winning the match.

By this, I mean that in most cases, a character getting a lead of 2050 votes in 8 hours means the end of the match. However, the track record of these two characters would indicate otherwise. Most of the people rooting for Donkey Kong to actually pull this off knew that he needed a very large lead, because one, Donkey Kong is historically known for choking. Two, Master Chief came back from being down 2400 votes against Frog, and Frog is arguably a stronger character than Donkey Kong is. And Chief had Halo 2 to draw from.

And most people knew all of this already, so when Donkey Kong's lead stalled at 2050 and began to rapidly go into a downward spiral afterwards most people had already begun calling the match in Master Chief's favor despite the comeback just beginning. One could argue that such mainstream knowledge of past poll results killed much of the luster that Chief's incoming assault had, though it was pretty funny watching those select few people who called the match prematurely try to explain themselves afterwards.

As many people expected, Donkey Kong's lead being stalled was the beginning of the end for him, and in true 1993 Houston Oilers fashion, Donkey Kong began ripping apart at the seams and his lead deteriorated almost as fast as it had formed. Few people actually believed that Donkey Kong's lead would hold, but the rate that he was losing votes come the afternoon really made him look like a joke. For all the work that DK put into getting that lead over the heavy favorite and for all the work he put into holding off Master Chief's onslaught until the afternoon, the historic Xbox day vote absolutely killed him. DK began losing nearly 100 votes per five minutes at some points, and by the time the evening vote came, Master Chief had caught DK and proceeded to blow past him without a hitch.

And while Frog was able to hold off Master Chief and eventually come back to win, Donkey Kong didn't have a great night vote to fall back on. The end result was the realization of DK screwing up yet again, and Master Chief was able to add votes to his lead all the way until the end of the match. It got so bad for DK that Master Chief would only come 500 votes short of DK's biggest lead come the end of the match. Not only had Master Chief pulled off the biggest comeback we'd ever seen in one of these polls, but his 3500 vote swing is the largest turnaround on record. Granted a character almost has to face Donkey Kong to be able to pull something like this off, but the fact remains that Chief set a couple of records on this day.

The main issue that people had with this match is how DK got so close to Master Chief in the first place. In the year of Halo 2's release, Master Chief not only came close to losing to DK, but managed to underperform against CATS by a fairly wide margin as well. One could assume that this was DK's legitimate strength finally showing through, but this assumption also places Donkey Kong ahead of Vivi in strength. I'm not buying it.

I think the most likely explanation for Master Chief is that he's the least transitive character we have in these contests. The Halo series is absolutely hated on this site, yet enough of the game's fans come here to religiously vote for Master Chief over all else. Not only does this cause us to virtually never have an accurate reading on where Master Chief stands, and not only can it constantly cause Master Chief to be overestimated come Xst time, but it has caused over half of Master Chief's opponents to overperform against him.

Look at the list. Felix, Aeris, Crash Bandicoot, Frog, CATS, and Donkey Kong have all faced Master Chief. We'll even throw Crono in there. That's seven opponents for the Chief.

Two things. Master Chief may not be well-liked, but you can't deny that his matches are entertaining. A battle between him and DK was poetic irony at its finest, because you may never see another battle between such choke artists ever again.

Secondly, a good division of eight just dawned on me:

There's seven matches that could be decided by a combined 5000 votes or less, highlighted by Master Chief himself. 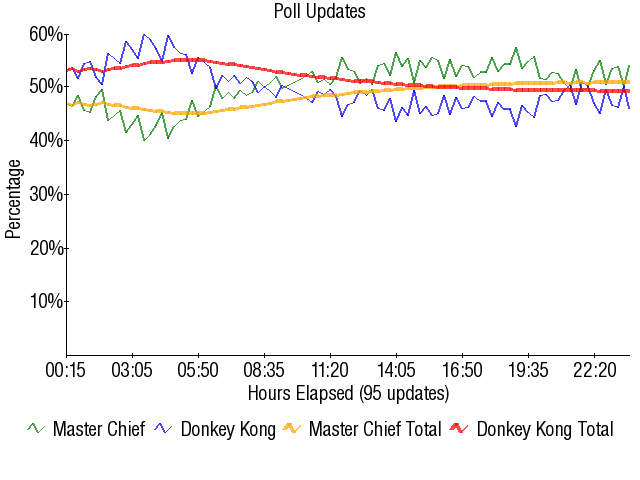 Of all Master Chief’s many guffaws over the years, this has got to be the silliest. In 2005 there was a string of matches that many stats folks were dubbing “the Gauntlet,” given that they were all semi-debatable and potentially huge upsets. Well, all five of them sucked and were boring and predictable. Whoops.

Then we get this. Nobody had any doubt that the Chief could make it out of Round Two here, and once again we got burned for putting our faith in him! Friggin’ Donkey Kong managed to pull out to a decent lead repeatedly in this match before he choked it away and let Chief come back and win. It doesn’t get much more hilariously embarrassing than this.

Retrieved from "https://board8.fandom.com/wiki/(1)Master_Chief_vs_(4)Donkey_Kong_2005?oldid=64097"
Community content is available under CC-BY-SA unless otherwise noted.