Master Chief has got to be the least transitive character ever.

On a related note, while I'm not an advocate of pictures making a difference, CATS is a different story.

Watch the video, then compare how long you see Eggplant CATS as opposed to Face CATS. It's no comparison, and Face CATS is quite clearly more recognizable. Given how many times that video has been seen, I don't get how one could assume that it wouldn't make a big difference in a match here on GF.

Three times CATS has gotten an Eggplant pic, and three times the stats have seen him as complete fodder. When he got the face pic in Spring 2005, he placed in the top half of the field.

Against Master Chief, he got the face pic that everyone knows and loves. Granted this wasn't going to do something as insane as allow him to win the match, but it allowed him to overperform based on past stats for the second contest in a row. Summer 2004 has CATS scoring around 20% on Master Chief.

But Master Chief is overrated in those stats, so everyone went and looked at 2003 for more reliable numbers. According to them, CATS scores just under 26%. Makes enough sense, and the average Oracle pick of Chief with 76.31% reflects this expectation quite nicely.

And then the match started. CATS took the early lead as expected, and Chief took it back as expected. However, what people didn't expect was CATS holding strong in the upper 30% range for a good while after the board vote wore off. No big deal, right? Chief being the absolute king of the day vote would come through and help him flatten CATS despite only having 63.72% of the vote after six hours of the match were past.

Seriously, what does CATS need to do to prove that he has legitimate strength in these contests and can win a match given the right opponent? Better yet, what does he need to do to prove that the face pic makes a difference? Between hours 6 and 12 in the match, Master Chief increased his percentage to 68%. However, during the next twelve hours of the poll (the timeframe he used to KILL Frog), he was only able to increase his percentage to what you see above. And while CATS did allow Master Chief to go insane for six hours, he still performed well above where most people had him pinned. I can't wait for the day in which CATS is given a match against a character lower than him in the stats and is given a face pic in the match.

On another note, this pretty much proved that Master Chief was the weakest and/or the most undeserving 1 seed in the contest. Not only did CATS overperform on him, but this is post-Halo 2 Master Chief we're talking about here. Very disappointing match for him. 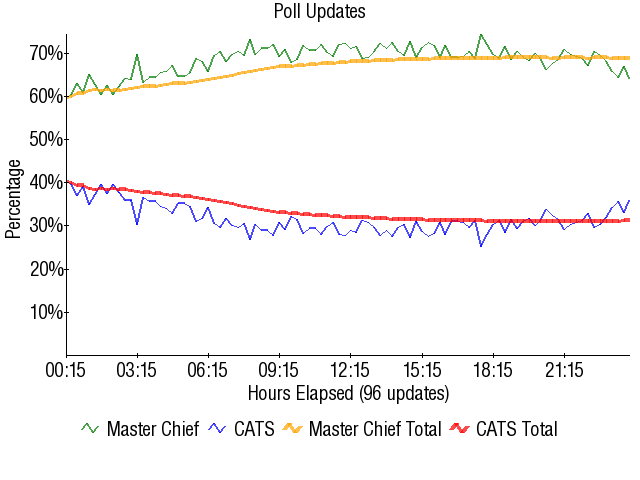 Retrieved from "https://board8.fandom.com/wiki/(1)Master_Chief_vs_(8)CATS_2005?oldid=64111"
Community content is available under CC-BY-SA unless otherwise noted.