The ultimate referendum on the Rivalry Rumble -- the best match of this (and maybe any other) contest didn't even count. The lack of prediction percentage is not a typo.

In a way, you could argue that this is the most accurate contest result we've ever had since nothing was on the line. No bracket votes to worry about, in other words. This was just everyone voting for their favorite to win and having fun along the way.

Though when this started, it looked like the trainers were going to absolutely godmode this match. The trainers were getting board votes out the ass early, and at the freeze they were near 60%. It reminded me a lot of L-Block, actually, because even though we all knew FF7 would make a push later against the joke trends you had to wonder if they would fall behind by way too much first. Remember, this is probably the site's most beloved entity short of Link against the most hated. This was going to get a lot uglier before it got better.

And get uglier it did. It only took 3 hours for the trainers to build a lead of 1000 votes, though 3 a.m. EST is about when Square starts going nuts. So in true "classic match" fashion, the lead was not destined to last. FF7 went all Climhazzard on that s*** and cut it right in half before the morning vote, and FF7 actually has a good day vote so it didn't thoroughly collapse once the day vote started.

It actually kept going up, to where we all thought the trainers were kind of screwed and couldn't hold on. FF7 came back, and cameback, even with all the trainer stalling, and then.... bam. The legendary tied update. Imagine this actually happening in an actual bracket.

The tie happened at 11:30 in the morning, but obviously FF7 was going to mosey on by, right? Nope. The next four f***ing hours was just a gigantic stall/tie, and neither team was able to move even an inch, much like the old Chrono Trigger vs LTTP duel in 2004.

So right about here we all assumed the ASV would take over and Pokemon would win. But even that trend didn't shape up as we thought. The ASV did happened, but the trainers only got up to a 250 vote lead with it before getting stalled again. For the next three hours, defying every trend we know, this match hovered between a 200 and 250 vote lead for the trainers. There were even rallies going on.

We were actually having fun! It was like... you know, an actual GameFAQs Contest or something!

Then the evening vote kicked in, which is historically Square time. Soooo Cloud and Seph dug in and started the slow inchworm act to get rid of the 250 votes, and with 5 hours left in the poll they managed to get that bad boy under 100. Then they kicked up the pace and erased that whole lead in like 10 seconds (it was actually like 45 minutes, but bear with me), and looked like they would stomp to the win here.

But no! "AND DOWN THE STRETCH THEY COME!", as Dave Johnson would say.

These two just stalled. And stalled. And stalled. It was exactly what the CT/LTTP match was supposed to be, but the goddamn idiotic west coast trash start/end time ruined it. Point is, these two stalled and tied and inchworm'd their freaking balls off for update after update, hour after hour. It was the only time all contest where the board was enraptured in a contest match instead of arguing over pedophilia and anime (because that's totally the way to impress girls you guys, keep it up).

This all culminated in perhaps the most legendary final hour we'll ever see. At 11:17, the match was dead effin tied. Then Pokemon started rallying its ass off, but here the thing: It wasn't really working that well. The trainers led by 5, then FF7 led by 7, then the trainers led by 16. It all came right down to the end, where Pokemon finally got an influx of votes and managed to lead by 30 with one update to go.

FF7 had the right strategy in place. Don't have Pokemon needing to go nuts in that last update, or you'll lose. FF7 was actually the one to win the last update big, but it was juuuuuust barely not enough.

Final Score: Trainers win by 10 votes. Vlado and iGenesis of course made absolute fools of themselves, like they always do when Pokemon is involved, which made this amazing match all the better.

Unfortunately, there's no real way to analyze this except that people wanted the trainers to win more and that early vote just annihilated FF7. In a contest match between RBY and FF7? I'd pick RBY, but it would be an absolute barn-burner just like this one.

There's also the matter of where this match stands on the all-time list, but the "doesn't count" thing hurts it a bit. 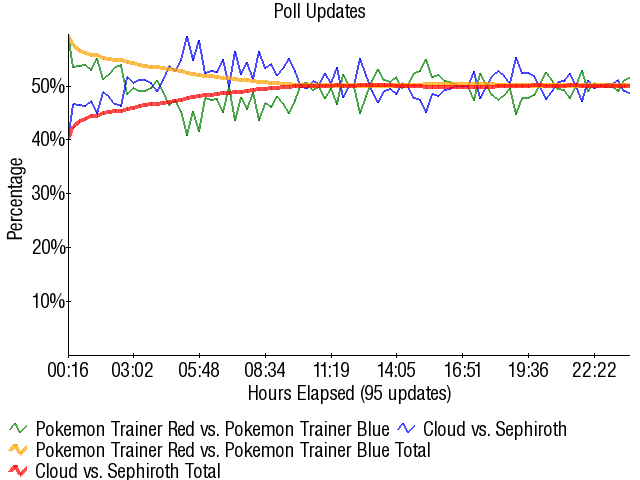 • Previous Match       • Next Match
Retrieved from "https://board8.fandom.com/wiki/(1)Pokemon_Trainer_Red_vs._Pokemon_Trainer_Blue_vs_(1)Cloud_Strife_vs._Sephiroth_2011?oldid=69618"
Community content is available under CC-BY-SA unless otherwise noted.