Phazon Suit Samus, bay-bee. Her best model by far. Granted she was up against Cleavage Yuri, but that's besides the point.

Going into this contest, the most most hyped match was the inevitable Mario/Samus clash. People who are too obsessed with the stats to think outside the box figured Samus to be the odds-on favorite to win the entire contest (and that she'd blow past Mario with ease, because after all, she is higher in the X-STATS that everyone seems to love so much), and argued for her as such. Others decided to go against the stats and preach the now-famous "IT'S FREAKING MARIO!" line. The main argument was that despite Samus being higher in the stats, Mario could still SFF her due to being Mr. Nintendo. However, this would amount to rSFF, something we've never definitely seen before. Sure there was Mega Man/Zero (and I think RPGuy made a proof that showed Yoshi/Luigi being rSFF, as well), but no clear-cut cases of rSFF giving the "weaker" character the win in a match.

In the fifth match of the contest, it was Samus's job to come out and prove that she was still the odds-on favorite to take down Mario; and she delivered pretty easily. Yuri may have been a new character, and it may be difficult to prove someone's strength based off of new fodder, but Samus came within a few percentage points of breaking 90% in a match. 90% is very rare territory in these contests, and only the best of the best will ever be able to see such numbers. Samus started this match over 80%, and gradually blew up her percentage as the match wore on. There were occasional spots in which Samus lost a bit of percentage every now and then, but it was little to be concerned about if you were a fan of hers.

What I don't get are the people saying that this was an underwhelming performance by Samus. As someone that has Mario over Samus in his bracket, this match was a bit discouraging. I figured that Samus blowing the hell out of a cult RPG character was more impressive than Mario's possible SFFing of Joanna Dark, especially considering that Samus's score was better than Mario's. Samus also had a higher prediction percentage, for what it's worth. The only knock you could really make against Samus at this point was the fact that the girl simply isn't a good vote draw. Mario's poll did almost 15000 votes better than Samus's, though some would blame the sudden dropoff to the Character Battle IV banner no longer being over at Gamespot once this match came about.

Then again, none of this should have mattered. Samus was higher in the X-stats, so all she had to do to prove that she could beat Mario was to prove that her strength was legitimate, right?

Oh yeah, I can't mention Yuri without Kyle Bowen's rallying helping to get Yuri into the contest. Sure Yuri was one of the "just happy to be here" characters, but getting in is an accomplishment in and of itself; it's more than what we can say about Aeris. Of course, this eventually led to one of the biggest whinefests of the entire contest over on the board. Apparently Samus not having "character" makes her unworthy of beating someone as great a character as Yuri Hyuga. I can't really comment on this given that I've had the two Shadow Hearts titles sitting in my room for weeks now, but you'd think that people would stop assuming that every character has a chance to win any match. They don't. This was just one more day filled with people whining about how Samus doesn't deserve her popularity while praising Yuri to no end, and some idiot managed to ruin the ending of SH:C for me by not putting a spoiler warning.

From a board perspective, this match was horrible. Good for Samus in proving that she's a force, but not much else. 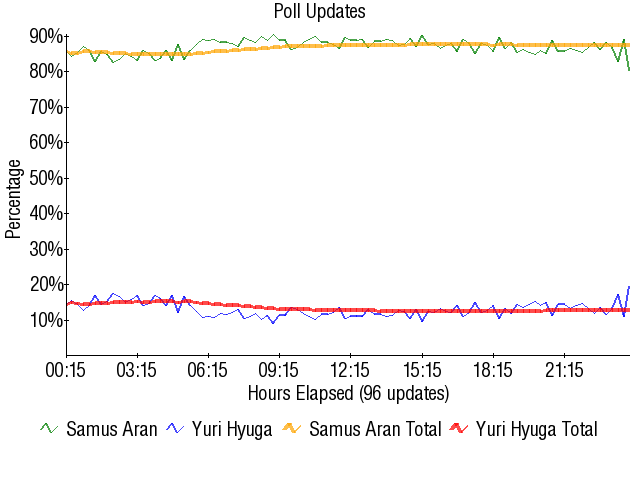 Retrieved from "https://board8.fandom.com/wiki/(1)Samus_Aran_vs_(8)Yuri_Hyuga_2005?oldid=73347"
Community content is available under CC-BY-SA unless otherwise noted.