It all came down to this, and thankfully, we got to see a decent show early. Ganon took the early lead, and though he lost it after a few minutes, we at least got to see something decent in the finals. Ganon even made a minor comeback attempt before finally falling under for good.

The only thing left to do from there was to see whether or not Ganon would outperform Bowser, whether or not the match would hit 100,000 votes (which would be the only 100k match in the contest), and to see how the final Xsts would go down. I'd go into long detail about how the match broke 100,000 votes and how Ganon outperformed Bowser, but you can see that for yourselves =p

The only thing this match truly did help prove is that there was something amiss in this contest's voting trend, and I only hope it carries over into the summer. In Sephiroth's first three matches, he absolutely dominated; just ask Liquid whether or not Seph was having any problems dominating this contest. But come Bowser and Ganondorf, Sephiroth fails to break even 60%. Anti-voting can be blamed somewhat for this, but not that much. I think that this contest's voting trend was packed with franchise voting, which would help explain Ganon and Bowser's surge. But then you look at Ocelot and Liquid and wonder if this is the truly the case. Then again, Bowser and Ganon are main villains in mainstream GameFAQs series, so it's tough to call either way. It's an effect that we all know exists, but can't quite explain yet. Hopefully we'll get some answers over the summer.

I'd sure as hell love to know why Kefka was in that poll and not Bowser. Did CJayC completely forget about Bowser making it into the Final Four? And judging by Bowser's spot on the bracket, I can only assume he got more nominations than anyone else.

One of these days, CJayC will crack and show us the results of the nominations. Hopefully. 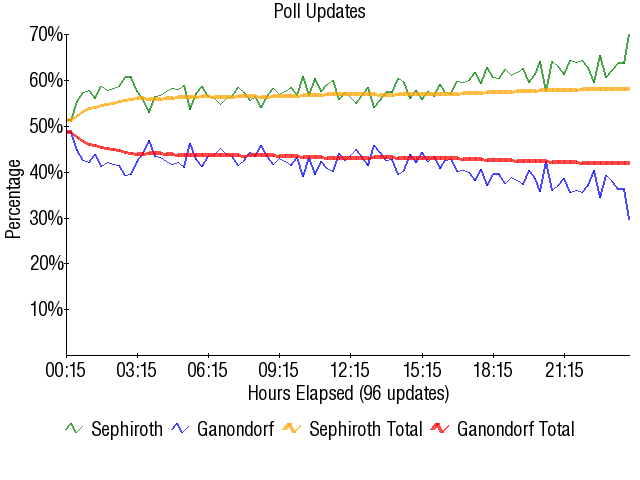 Retrieved from "https://board8.fandom.com/wiki/(1)Sephiroth_vs_(1)Ganondorf_2005?oldid=56003"
Community content is available under CC-BY-SA unless otherwise noted.