The second Missingno upset Crono, this match was hyped beyond belief. The basic idea is Missingno would catch an L-Block run and win the contest if he could get past Sephiroth, and the rallying was set in place days in advance. People thought Missingno could catch an insane early rally, build up a lead of 2000 or so and render the Total Domination Zone irrelevant. And if it was at all close come the morning, forget it. No way would Missingno's ralliers let him lose to Sephiroth of all people.

It... didn't really work out that way. Missingno did dominate the early vote, and had a lead of over 200 votes at the freeze. For most characters, this would be an amazing start. But not here. Remember, L-Block had a lead of over 800 votes on Link through the first five minutes. Missingno supporters were actually very disappointed here, and were calling the match over.

Unfortunately, they were 100% right. Even as Missingno spent the next two hours getting his lead just over 600 votes, there was a real sense he dropped the ball on a great opportunity. For reference's sake, L-Block had a lead of 4700 votes on Link after 2 hours. Translate that to 1v1 and you get what, 10000 votes? Obviously, Missingno wasn't close to that. Sephiroth was making some great stalls even as Missingno built his lead, and there was a sense of the inevitable once the deep night vote began.

Sure enough, this match ended once the TDZ began. Seph erased the entire deficit in about an hour and a half, and turned a once-close match into a complete laugher. This match did set records alright, but not the records Missingno fans were hoping for. Sephiroth ended up dominating well past the TDZ, crushing even the morning vote en route to a 3800 vote win. It ranks up with the biggest vote swings ever, though no one can decide on the criteria for that one. Some call Master Hand > Kuja the biggest swing ever, and add the "comeback" caveat to keep people from counting matches that have stalled for awhile before someone just takes off.

Fine, but what about Sora vs Alucard? Sora was down 50 for awhile before winning by over 10000 votes. Knuckles was losing to Kefka for an extended period by over 100 before winning by 12500 or so. Or if you want a match where a "legit" comeback had to take place, Street Fighter 2 was beating Mario RPG by 230 until the morning vote hit. That match was very much in doubt, we didn't know a lot about voting trends or whatever else. SF2 looked like it was going to win. And then... boom. Mario RPG swings 12500 votes. Someone come up with a good definition for this, because it's one of those "needs a wiki page" topics.

Though Missingno lost, he gave us one hell of a run and would have made a match of this were this a day match. I love what creativename has done for these contests, but his stat topics Buzz Killington act got old years ago -- and the assumption Sephiroth's morning vote here proves he would have dominated Missingno in a day match is ridiculous. The ralliers had to sleep eventually, saw how far apart it was in the morning and didn't even bother. That's all this proves. If anything, this match proves just how much Missingno did with legit strength this contest.

For Sephiroth, you'd think this would be a huge win for him. It wasn't. If anything, winning this match was the biggest mistake he's ever made. He was already a huge target for anti-votes before beating Missingno; beating him only incurred even more wrath. It's ironic the Missingno fans took this contest more seriously than anyone else -- You know, the whole "we vote for jokes because you guys treat this stuff like it's your life" crowd -- but that's how contests work sometimes. Most other characters beating Missingno could shake such things off. Not Sephiroth. Not in a year when Snake > Sephiroth was *the* hyped upset of choice. 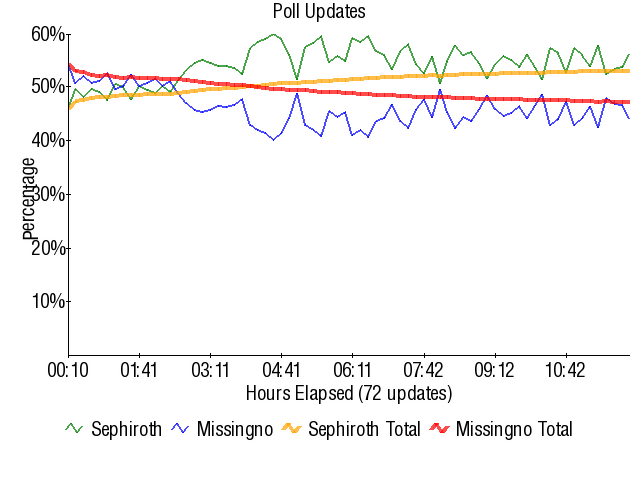 • Previous Match       • Next Match
Retrieved from "https://board8.fandom.com/wiki/(1)Sephiroth_vs_(13)Missingno_2010?oldid=59295"
Community content is available under CC-BY-SA unless otherwise noted.