This is one of those rare matches in which there is a blowout with plenty to talk about. Liquid got killed, and anyone can see this. The problem is that 2004 stats suggest that Liquid should have scored 35% in this match. He quite obviously didn't come anywhere close, despite actually having the lead in the match early on. The "Sephiroth will win anyway so I'm voting against him for the hell of it" vote allowed Liquid to hold a slim lead early, and though everyone knew Sephiroth would have no problems winning, no one expected that Seph would dominate quite like this.

Remember all the Ocelot defenders who said that Ocelot could beat Bowser if he were stronger than Liquid? There's true irony in the fact that Ocelot got killed despite very well being stronger than Liquid. Unless Sephiroth absolutely killed Bowser in the Final Four, Liquid would wind up being the weaker of the two. THIS SITUATION SUCKS AND IT IS NOW ABOUT SOMETHING ELSE.

The obvious problem with Liquid's complete tanking (which many were weary of after his struggle against Lavos) are the adjustments made to the 20XX Division. The only thing I can think of is that Mega Man, Solid Snake, Shadow and Tidus should be adjusted as if there were Link/Mega Man SFF, and the Frog/Liquid/Chief trio left alone. It's tough to imagine Frog and Chief as being where they belong when Liquid is so closely related yet bombs so badly against a character that everyone loves to hate. Something realy strange happened in the lower half of the 20XX Division in Summer 2004, and if I were a betting man I'd say that Frog is to blame. I feel that he vastly overperformed against Solid Snake, but I have nothing to actually back this up other than Snake's crappy match picture. Your guess on what the hell went down in there is as good as mine. 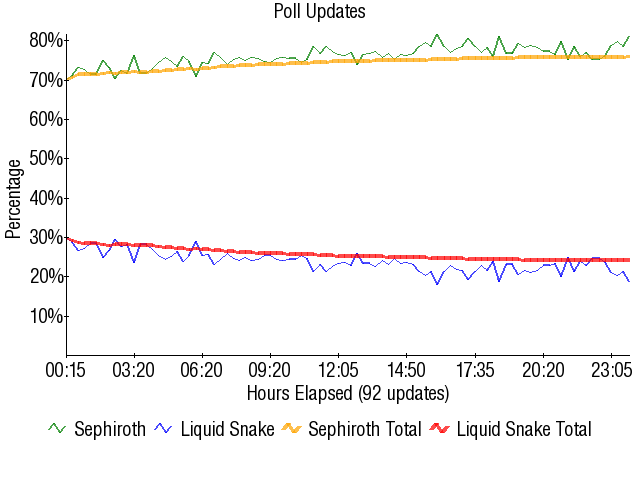 Retrieved from "https://board8.fandom.com/wiki/(1)Sephiroth_vs_(2)Liquid_Snake_2005?oldid=55993"
Community content is available under CC-BY-SA unless otherwise noted.