So, who remembers that guy who made that "I want Ramirez to go up against Sephiroth" topic? I wish I would have archived that one, because it was the ultimate "be careful what you wish for topic" of the entire contest. The topic hit 500 posts, CJayC noticed it and set this match up in jest.

Anyway, Ramirez had absolutely no chance whatsoever in this match, and he would wind up being so weak that he was completely unable to benefit from the "Let's all vote against Sephiroth because we know he's going to win anyway" votes that all of Sephiroth's other opponents were able to enjoy at the beginning of their matches against him. Ramirez got his ass kicked early and often in this match, and it eventually grew so bad that he was unable to outdo Vyse's percentage against Cloud in the Summer 2004 Contest: http://www.gamefaqs.com/poll/index.html?poll=1758

For anyone hoping that Sephiroth would somehow be off of his game in this contest, this match was a bad sign. Sephiroth was easily the strongest character coming into this contest, and nothing short of an act of God was going to prevent him from winning this contest.

On the other side of the equation, all of the "Ramirez is a far better villain then Sephiroth" topics were fun to read. Having never played Skies of Arcadia before, I honestly never knew that SOA's villains were all named after Spaniards. Correct me if I'm wrong, but aren't all the Spanish named in SOA copied off of real-life explorers? 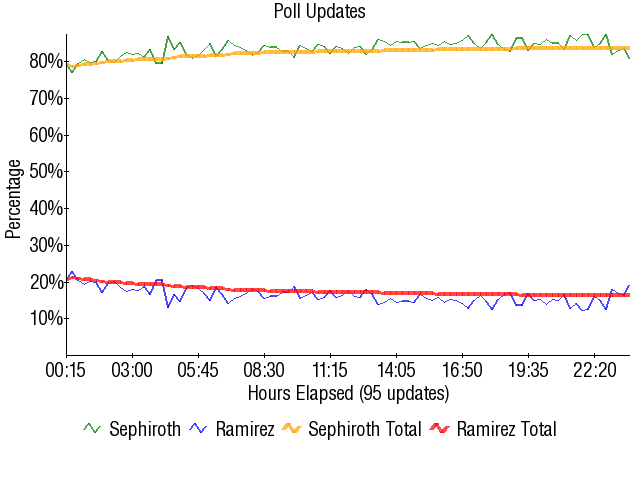 Retrieved from "https://board8.fandom.com/wiki/(1)Sephiroth_vs_(8)Ramirez_2005?oldid=55950"
Community content is available under CC-BY-SA unless otherwise noted.