Because of various multi-way poll results, this was the hyped match of the contest going in. Then as more and more of this contest played out, it became clear Snake was going to win this match. And easily, at that.

Not only that, Sephiroth was bound to lose the board vote worse than usual because of beating Missingno. Sure enough, Snake jumped out to some ridiculous early lead along the lines of 25-1 and never really looked back. This was as dominating a performance one can get from a 53-47 win, and this came during a day match. MGS sucks during the day, and FF7 is actually better overall during the day than at night. Night time only looks stronger because of the Total Domination Zone. If this were a full 24 hour match, it would have gotten worse for Sephiroth. A lot worse.

How bad did it get for him? It took Sephiroth more than 4 hours to win an update in this so-called debated match. That first update win was by a grand total of 7 votes. He only won about 10 updates all match, and went out like a scared dog. Even worse is it will likely get worse for him before it gets better. Sephiroth is in Master Chief territory, and not even a full remake of FF7 will totally get him out of there.

For Snake, the focus wasn't really on Sephiroth here, but on Cloud. 53-47 on Sephiroth is an amazing performance, and this could have been 54-46 in a 24 hour match. If we get this format again, the 24 hour matches need to start one round sooner in the quarterfinals. 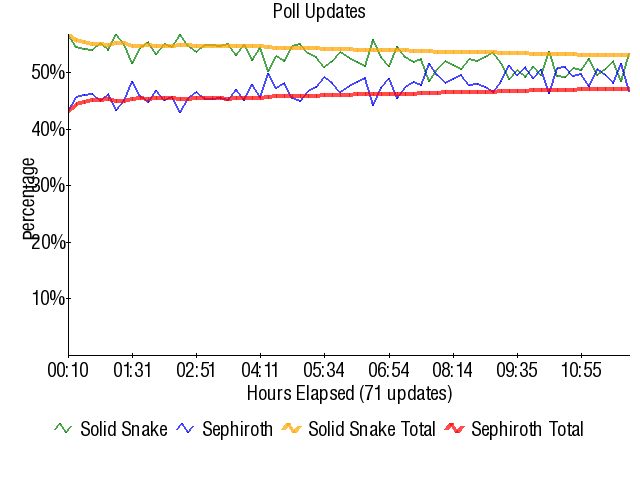 • Previous Match       • Next Match
Retrieved from "https://board8.fandom.com/wiki/(1)Solid_Snake_vs_(1)Sephiroth_2010?oldid=59320"
Community content is available under CC-BY-SA unless otherwise noted.