I seriously dare anyone to find a better match pic from this entire contest.

After Snake's first two matches, he was somewhat reeling and relatively underestimated. Some people felt that Snake underperformed on Manny and that Zelda perhaps had a chance to defeat Snake. After Snake took care of Zelda with relative ease despite a horrendous match picture, it was on to Sora in the divisional final. Snake had something to prove, and he finally went all-out and showed what he was capable of come this match.

Sora was projected to score almost 44% in this match. It was clear that he would get nowhere close within the first five minutes of the match. Snake was close to 70% at this time, and no Kingdom Hearts morning or after-school vote was going to save Sora from the beating that Snake would lay on him all throughout this match. Granted Sora did recover a tad to bring Snake down to the percentage you see above, but the fact remains that Sora underperformed by almost 10% in the match. Not only did Snake win, but he went Packers > Saints 52-3 on Sora's skinny ass.

A couple of people brought up this being traditional SFF (KH and MGS2/3 are all on the Playstation 2), and while I completely disagree with this I think a more distant SFF reared its head in this match.

Every match has a degree of SFF in it. With tens of thousands of people voting, it's a guarantee that at least one voter is familiar with both poll options. In the case of Kingdom Hearts, the game sold 4 million copies in one year worldwide. Plenty of people are familiar with the game, but how many of these people feel strongly enough about the game to truly care for it when it or its characters go up against other games and characters?

For the most part, Kingdom Hearts has been lackluster in these contests. In 2003, Sora was in one match and was blown out by Aeris. In Spring 2004, the game "bombed" against Soul Calibur before suffering a respectable loss to the game that would end up being an absolute beast, Starcraft. In essence, Kingdom Hearts retained respectability in that contest.

Come 2004, Sora blows out HK-47 and favored Ryu Hayabusa before a respectable loss to Samus that helped prove that Samus was not nearly as strong as the first round of that contest would have people believe. Then in this contest, Sora blows out Agent 47 and Alucard before being absolutely pasted by Solid Snake on Snake's home turf.

Literally! They're sitting right there on one of the struts from MGS2, complete with the exclamation point over Sora's head. And if this match is any indicator, Sora got his ass whipped when he went to investigate.

Anyway, my point is that Kingdom Hearts is similar to Resident Evil characters and Master Chief in that you never know what you'll get from them. One contest will see the game's villain require the morning vote to hold off CATS, while the next will see the main rival turn a doubling into a near-win over Frog, a character that looked quite strong after the summer of 2004. Predicting matches involving any of these characters (or the game itself, should the time arise again) is a chore, because hardly anyone knows where many of them truly stand.

Though Sora and company do have Kingdom Hearts 2 on the way, so that should help everyone out a bit. 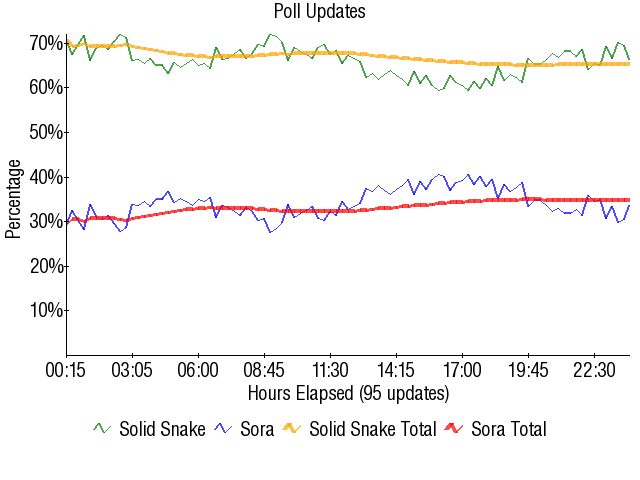 Retrieved from "https://board8.fandom.com/wiki/(1)Solid_Snake_vs_(2)Sora_2005?oldid=56124"
Community content is available under CC-BY-SA unless otherwise noted.