After Bowser broke 40% on Sephiroth in Spring 2005, a hot upset pick was Bowser over Solid Snake in this very match. And given the way that every Metal Gear Solid character has seemingly disappointed since Snake's peak in 2003, it wasn't too far-fetched. If you went by stats in comparing Bowser 2005 to Snake 2004, you saw extremely alarming numbers in favor of Bowser. But for the second day in a row, the stat fanboy pick feel flat on its face, and let me tell you from a personal perspective that it really sucked being on the right end of the Mario "upset" but on the wrong side of this one. The Mario buzz lasted all of one day :(

But on the bright side, the match actually turned out to be one of the best of the entire contest. Before it even began, for what had to have been about the 100th time, Snake was on the wrong end of the match pic. He got his sprite from, uh.... some NES game I assume, while Bowser got his Mario & Luigi Superstar Saga sprite. Bowser was recognizable and was therefore given a mass advantage. For the third time this contest, you could barely make out who Snake was.

But that didn't stop Snake from kicking some ass early, and after shaking off Bowser's early fight he jumped out to having over 55% of the vote. As the match progressed Snake was easily able to extend his lead, though his overall percentage gradually went down hair by hair as the morning vote hit. Bowser was able to win an update every now and then and even had a few long stalls, but for the most part Snake was given little resistance from increasing his lead and moving on to what seemed like a fairly easy victory. The most stunning thing of all is that despite being the technical statistical underdog and being given apic disadvantage that we hadn't seen since Solid ****, Snake was kicking ass when put into perspective.

Once the afternoon vote rolled around however Snake saw his lead cap out at just over 2100. This wasn't a big deal given that the match was almost halfway over and a comeback for Bowser seemed impossible, but it didn't take long for Bowser to give Snake the scare of his life. After Bowser stopped Snake from gaining any more votes, he went on a huge tear into Snake's lead. Most people thought nothing of it given how far in the lead Snake was, but people took notice when Bowser began taking in votes at a rate that would have put Bowser in the lead before the night vote began.

At 3 PM EST, Snake's lead was 2100 and Bowser had already begun tear-assing into the lead that Snake worked so hard to build. In the late afternoon and early evening, Bowser tore into Snake's lead so badly that he managed to have it down to 930 at 9 PM EST. Had Bowser kept up this rate he could have easily won by a few hundred votes, but Bowser's historical struggles with the second night vote came back to haunt him and he just... barely.... ran out of gas. He managed to continue cutting into Snake's lead until it was down to 750, but Snake recovered with the second night vote quite nicely and was able to take 450 of the votes back before all was finished. It was a fairly anticlimactic ending to a match that had all of us going nuts for well over six hours.

Personally, if this same match takes place assuming the nonexistence of Metal Gear Solid 3, I still think that Bowser could have won relatively easily. I don't think that the underperformances of Ocelot, Liquid, and even 2004 Snake were all a fluke. Though with that said, this match took place after MGS3 and despite a little bit of a struggle, Snake won fairly easily. I say fairly easily because I'm one of the many that now thinks that Snake wins by a wider margin if he isn't (for once) screwed by his match pic. His match with Sora was the one time he had a pic that did him justice, and look at how well he did with it. As it stood, Snake finally was able to earn the Final Four spot that had eluded him for three contests prior to this.

As for Bowser, while he somewhat validated the strength that he showed in Spring 2005, he still underperformed based on statistical expectations and those of us who picked Bowser based on how well he did in the spring looked like idiots after this match <_<

With this in mind, a small poll question: If Snake and Ganondorf met in a match after Twilight Princess, but before Metal Gear Solid 4, who do you go with? 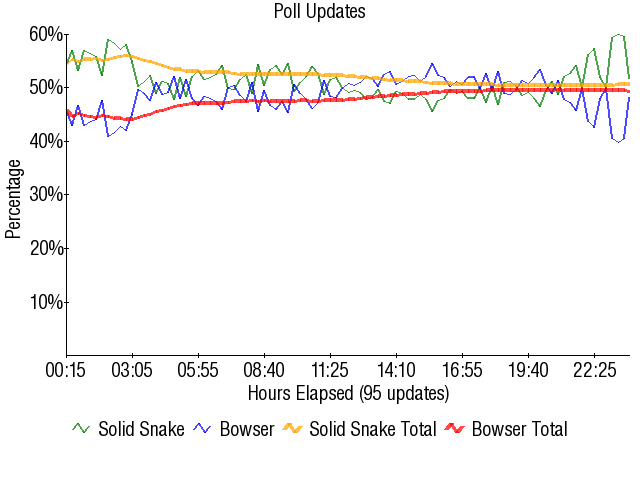 Retrieved from "https://board8.fandom.com/wiki/(1)Solid_Snake_vs_(3)Bowser_2005?oldid=56138"
Community content is available under CC-BY-SA unless otherwise noted.