Oh, yeah. Snake vs. Zelda. Remember when it seemed like Zelda had a chance in hell of winning this?

Well, that all ended about ten seconds into this match. Zelda pretty much bent over and let Snake nail her up the ass from the very beginning. Snake, you sick pedo. She's, like, ten. Freakin' perv.

Besides, with a name like "Solid Snake", the implications only get worse.

Anyway, let's go over why I'm smart, you suck, and why we all got this match wrong.

Let's go back to Round 1. Snake flattens Manny Calavera with eighty-somethin' percent.

But wait, Manny who?

Exactly. Manny Calavera sounds like something I do when I've got crap on my fingers after the toilet paper rips. Oh, he's from Grim Fandango? Excuse me for not giving a crap about point-and-click adventure games. They're all the same. Click on this, collect this doodad, engage in some storyline you don't care about, click some more, try not to barf while the game bombards you with lush and tranquil scenery to show how "artistic" it is.

Anyway, we all thought that eighty-somethin' percent meant that Snake was underperforming. Note: we're dumbasses.

The next day, the heavily debated match, Vivi vs. Zelda, was upon us. Why this match was ever debated is beyond me. In the spring, Kuja did about as well as a jar of peanut butter. Wait, that's too kind. I like peanut butter. So screw Kuja.

Yet people were still surprised when Zelda kicked Vivi's ass. Over 60%. Sure, you can spew out BS about Vivi being so strong because of the "Black Mage Factor" or something like that, but he's from FFIX. And from what I've heard, the good points of FFIX begin and end with taking the disc out and playing another game. I wouldn't know, seeing as how I've never played it-I do, however, have unopened copy of the game that's been sitting on my shelf for about a year now. I should get around to playing it sometime.

So, anyway, Zelda kicking Vivi's ass should have been no surprise. What victories does Vivi have under his belt? He struggled to edge out Donkey frickin' Kong? Whoamg, powerhouse right there, folks.

1. People are using values from different years to compare characters. This, of course, is absurdly inaccurate.

But that's not quite it! Compounding our statistical delusions was the match pic, which caused an uproar all over Board 8:

Okay, we've got a cute Zelda pic, here, but where's Snake? All I see on the left is a vaguely-human looking figure with no face.

Oh damn, that's Snake. I guess the "Acid" in Metal Gear Acid is really referring to the part where battery acid is poured all over Snake's facial features. Honestly, I've found better pics of Snake in my stool.

As you might expect, this caused many more people to jump on the Zelda bandwagon, because apparently the average GameFAQs user is more inclined to vote for a ten year-old girl than a "badass" black thing with a beard. Oh, how stupid we all were.

The match rolls around...you know the story. A pity...all those petitions to get Ceej to change the pic went to waste. Too bad.

Boring match, in the end. And we never saw it coming, because we're just that damn cool. And by cool, I mean stupid. 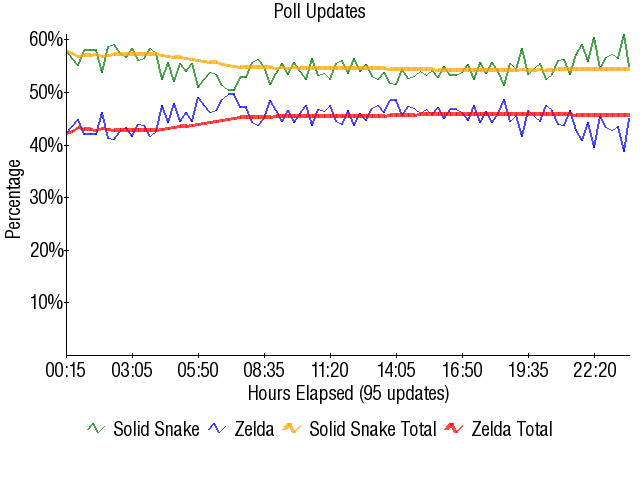 Retrieved from "https://board8.fandom.com/wiki/(1)Solid_Snake_vs_(5)Zelda_2005?oldid=56096"
Community content is available under CC-BY-SA unless otherwise noted.