What's up with that match pic? I heard someone say that it isn't Solid Snake? o_O

Anyway, while Snake beating the hell out of Manny was a given, that wasn't really the point of this match. Shake, who has been trying to get Manny into one of these contests since 2003, finally managed to succeed by making a topic saying he'd leave the board if Manny didn't get into this contest. The board was moved by this (despite practically no one actually believing he'd leave, but who cares? =p) and nominated the hell out of Manny. Shake also e-mailed virtually every Grim Fandango site you could think of in an effort to gather support, and when all was said and done, Manny made it in. This was a moral victory in and of itself despite Manny's appearance being on par with your standard 16 seed in the NCAAs; "It's nice to make it, but reality will set in within the first ten seconds of the game after Duke starts whipping my ass".

Another wonderful effect of this match was that I think it got Heroic Mario to play Grim Fandango. I'm not 100% sure of that, but that's besides the point. HM liking a game is a good thing, especially when he decides to start giving copies of it to everyone. Dunno how this didn't happen in the three years Shake has been preaching the game's awesomeness, but ces la vie. It was funny watching some idiot try to accuse Shake of only liking Grim because of HM's fanboyism, though. Truly hilarious.

As for the match itself, it was... a bit weird. Yes it was a blowout, but it was one of those blowouts where people's expectations fooled them. It all boils down to Snake spoiling us last year with his blowout of Tanner, because I think a lot of people were expecting similar numbers in this match. If you go a bit deeper, people started pulling out Guybrush Threepwood's numbers in an effort to make Snake look bad. Guybrush putting out more games than Manny was supposed to somehow prove that he was equal to or stronger than Manny, I suppose, and that Snake "only" scoring 84.09% of the vote on Manny when the 2004 adjusteds have him at 84.06% on Guybrush is supposed to somehow prove that Snake has somehow lost a step.

Because scoring almost 85% of the vote is a regular occurrence, mind you. Regardless of what you thought while this match was going on, you were spoiled by what Snake did to Tanner last year if you assume this match to be a disappointment. And not to harp on last year, but it is at all possible that Snake SFFd the hell out of Tanner? Driver and MGS both appeal to the same fanbase, I'd think.

By the way, there's this tiny matter of "appeal". Don't mess with the Grim Reaper, especially when he's got a gun. 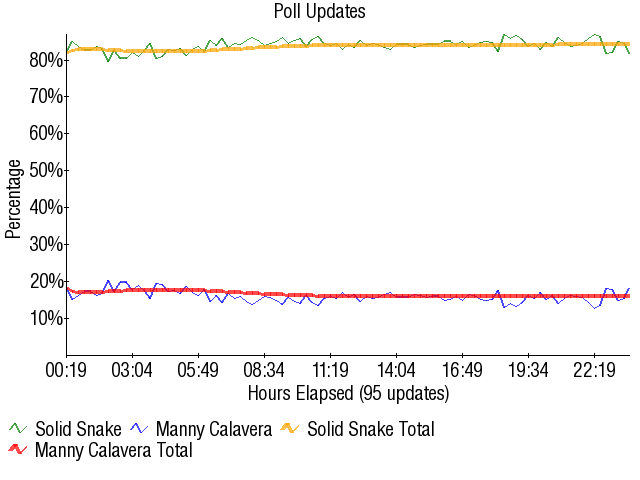 Retrieved from "https://board8.fandom.com/wiki/(1)Solid_Snake_vs_(8)Manny_Calavera_2005?oldid=56033"
Community content is available under CC-BY-SA unless otherwise noted.