When did Solid Snake turn into Cloud? This was the second match in a row where his board vote just sucked, but then he shrugged it off and rose to a good percentage. Well, decent percentage. Who really knows what doubling Fox means, since all his losses going back to 2003 can be blamed on Nintendo SFF in one way or another. His last legit loss before this one was getting 25% on Cloud in 2002. So clearly Snake was on pace to get like 40% on Sephiroth, since the 2002 stats are the most reliable thing ever.

On a side note, there were 7 rounds this contest. Solid Snake was in 6 of them. Of those 6, two did not have Brawl Snake in the picture. Seriously people, he's been in other games. And my R6 picture barely even counts, so you can make a good argument Brawl Snake disappeared once all contest. It's almost like people are overcompensating for his years of awful melty art and sprites. 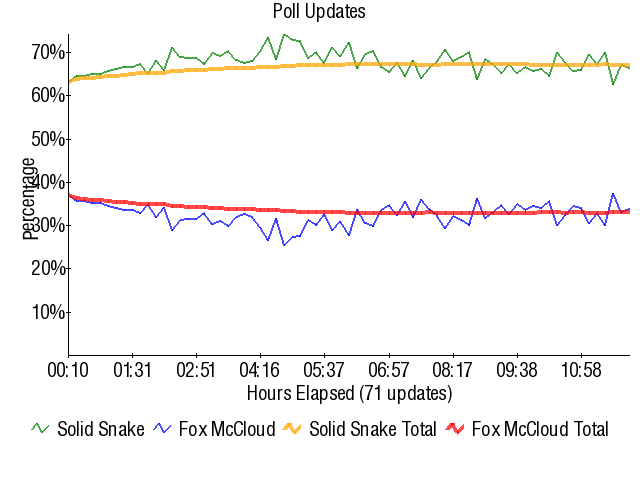 • Previous Match       • Next Match
Retrieved from "https://board8.fandom.com/wiki/(1)Solid_Snake_vs_(9)Fox_McCloud_2010?oldid=72670"
Community content is available under CC-BY-SA unless otherwise noted.