Are there any two characters more fitting of a match than these two? Both characters were amazing to begin their gaming careers, yet both are now masters of putting out one rehash after the other to what has become a standing audience. The two are no longer capable of gaining new fans.

Do their companies realize this? Of course not. And it's at its absolute worst in Mega Man's case due to having over 100 titles but only averaging out at around 200,000 sales per. Sonic, as low as he's gotten, hasn't quite yet become what Mega Man is. Yes Sonic has put out a game on the N-Gage of all systems, and yes he's begun putting out collections, greatest hits and rehashes, but at the very least Sonic still puts out a new game with an original idea or formula every once in awhile. Mega Man however has ridden the same tired formula since Mega Man 2, released in 1989. Let it go, Capcom.

As for the actual match, I felt that this was a case where the two characters were close enough for the stats not to matter very much. Both characters have been on a gradual decline since their glory days in the Summer 2002 Contest, and it was simply a matter of which character had fallen farther or faster -- a true example of year to year volatility making all the difference in a match, perhaps.

All the standard debates took place, though the stats argument was weak this time around given how close the characters were. The buildup was really just fan and anti-fans arguing like hell about which character was worse. And thankfully above all else, the match picture didn't screw either of the characters over.

When the match finally began, it almost didn't live up to all the hype. Mega Man jumped out to an extremely fast early lead of a few hundred votes, and by the time Sonic began to stall Mega Man he was down by almost 400 votes two hours in. But Sonic was able to recover, and after a little bit of stalling the traditional Sega morning vote kicked in and gave Sonic a push for the lead. It took Sonic a long while to erase those 400 votes as Mega Man was no slouch, but after about two and a half hours of scratching Sonic was able to tie Mega Man before taking the lead for himself. It looked as if that morning vote would allow Sonic to take off like a bullet after Sonic's lead went from 19 to 72 a mere ten minutes after taking the lead, but Mega Man was somehow able to recover during Sonic's best time in the poll. Mega Man was able to completely stall Sonic and stay deadlocked during a time in the poll in which everyone figured that Sonic was about to go on a killing spree, and much to everyone's shock Mega Man was finally able to recover and take back the lead for himself. After Sonic tried his best to stall Mega Man from doing anything, Mega Man took off and increased his lead from the teens to the hundreds within two updates.

This left Sonic absolutely stunned and deflated, because he choked away a golden opportunity to end the match. During his best time, he was unable to put away Mega Man, whom many Sonic fans rank ahead of Mario in terms of most hated characters in gaming. Deus and Smurf are two good examples of Sonic fans who respect Mario despite not liking him very much, but absolutely detesting everything that Mega Man stands for.

Not only did Sonic choke away his best opportunity, but Mega Man jumped all over it. After Mega Man held off Sonic's morning push and took a lead of over 100, it only took Mega Man another five hours to get his lead over 1000 votes. It wasn't until this point that Sonic decided to wake up a little and fight back, but was it too late for Sonic to make a real push at winning?

After Mega Man pushed his lead to over 1000 votes, Sonic was able to stop him from increasing his lead much afterwards. Soon thereafter Sonic proved that he had one last push left in him, and proceeded to go on a massive late afternoon surge in his effort to win the match.

Mega Man's lead topped out at 1085. It took Sonic an hour and a half to get this to under 900, but from then on the floodgates were wide open. Sonic went on a massive push and began to easily erase most of the work that Mega Man had done earlier in the day with relative ease -- after Sonic got the lead under 900, he began to slice off 50 votes or more per update with Mega Man making vain attempts at holding Sonic back. Sonic was soon easily able to get Mega Man's lead under 300, but for whatever reason Sonic ran out of momentum.

There Sonic was, on the brink of a huge comeback and perhaps finally getting rid of the Samus 2002 ghost that has haunted him, yet he couldn't seem to get over the hump. The evening vote was dead even for both characters, and they remained deadlocked at a difference of around 300 for hours. The longer the stalemate dragged on, the better it was for Mega Man's chances to pull this thing out. This was confirmed by the second night vote which Mega Man, not Sonic, used to break the deadlock and pull away once and for all.

For the second time in 12 hours, Sonic had a golden opportunity to blow Mega Man the hell away, but choked. You had the feeling that this match would come down to whichever character choked last, and in this case Sonic literally handed Mega Man the match on a silver platter. And what was arguably the best match of the entire contest turned rather anticlimactic; the final margin of 742 was the closest we had all contest, which is my big complaint with this contest. There were no true nailbiters, and all the close matches ended.... not close.

For now, at least on GameFAQs, Sonic has fallen farther than Mega Man. However this is a rivalry that has good potential, because like I said earlier Sonic still manages to put out something new every once in awhile; Mega Man has simply released the same game 100 times. And though Sonic technically overperformed in this match, he literally had this match won (Twice!) and gave it away. A very disappointing performance, especially given the track record in gaming of the guy that Sonic lost to. 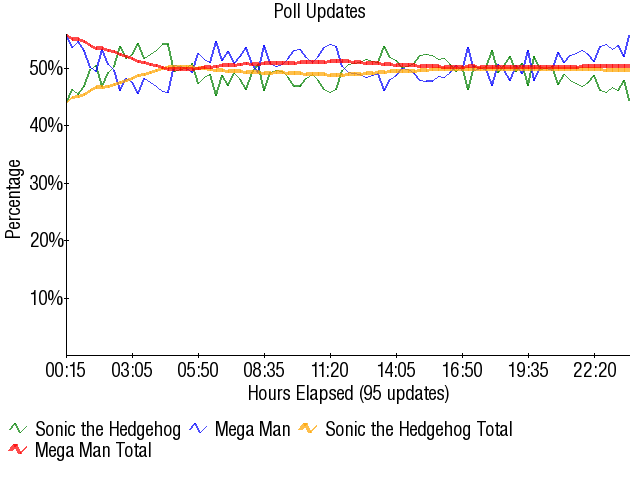 This match really could have gone either way for these two gaming icons – and, in fact, it did. Hype, similarities, and overall choking jobs (mostly from Sonic) made this one particularly memorable, as did the fact that it solidified – for the time being – who was the lowest rung on the Noble Nine chain. Not much else to say here, really; just a solid match with two very good competitors of almost equal strength. Those may not be as exciting as, say, a match where the lead changes every other update, but they have a certain charm all their own. Often stillness can be more tense than action.

Retrieved from "https://board8.fandom.com/wiki/(1)Sonic_the_Hedgehog_vs_(1)Mega_Man_2005?oldid=56142"
Community content is available under CC-BY-SA unless otherwise noted.