Only one thing confuses me about this match. As the match was drawing close, a lot of Terry Bogard fans started making the argument that Terry would be able to score 25% in the match. That makes no sense, if you ask me. 2002 Terry would be projected to get a mere 11.35% on 2002 Sonic. Terry obviously suffers in the 2002 stats from Donkey Kong getting SFF'd to hell against Mario, but either way, expecting Terry Bogard to increase from 11.35% to 25% against a contest elite simply because he was in three games that few people had even heard of before Terry was unexpectedly put into the bracket is a little out there when it comes to theories. Those three games may have been what allowed Terry to get back into the field after his abscence in 2003, but I doubt that his small but dedicated fanbase would allow him to make such a large jump in percentage.

As the match progressed, many people were surprised by Sonic pushing the issue and breaking 80%. Am I doing these calculations wrong? Because it seems like Sonic scored around where he would be expected to on an adjusted 2002 Terry Bogard. Either way, it was another predetermined, boring blowout in the contest. One thing that this match symbolized was the coming of the chaos division, which was the one division in the entire contest that had an aura of unpredictability to it from the start. 20XX came close, but the surprise in that division was unexpected. In the Chaos division, there were some matches that were hard to gauge no matter how many calculations were done. For a brief time during this match, the argument could even be made that Sonic had a chance against Samus. Not that this came into fruition, but the argument could at least be made after one Sonic match.

Of course, Sonic still had to wait until Samus took the field before truly making an argument for himself. 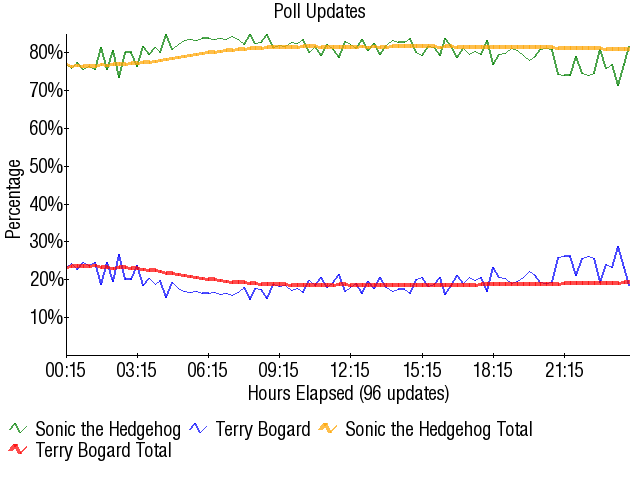 Retrieved from "https://board8.fandom.com/wiki/(1)Sonic_the_Hedgehog_vs_(16)Terry_Bogard_2004?oldid=55834"
Community content is available under CC-BY-SA unless otherwise noted.