With most of the entertainment out of the way for the second round, we entered a string of boring matches that essentially only existed to help the round come to a relaxing close. In fact, we weren't going to have another interesting match outright until Kirby/Bowser. Everything up until then were setups and placement bouts that solely exist to cut the weeds out of the bracket.

One such weed is Diablo, who could make a great case for being the fodder line these days. It's not like we can use Vyse with any accuracy, after all.

In terms of Sonic/Diablo the match, Sonic was a lock to win. No debate necessary. The only thing we could really look for in this match was for Diablo to validate his Spring 2005 strength, as well as to see where Sonic stood assuming a constant Diablo between then and now. Chaos and 20XX were horribly boring divisions, and virtually every match in them was either a lock, a contest to see who would get crushed by Sonic or Mega, or fodder/fodder duels. The only interesting match we would see in either division in the entire contest would be Ocelot/Pac Man.

And this match was about as boring as could be. The only thing of any note is that for a rather long while in the match, Diablo was given no link to the poll over on Diabloii.net. There was a stark contrast in how Diablo performed before and after the link was finally posted, and it validates what we knew all along; Diabloii.net was a part of Diabo's strength in the Spring 2005 X-Stats, and one must factor in a potential link should Diablo see bracket placement in the future. For what it's worth, another interesting fact of this poll is that Sonic didn't completely kill Diablo come the day vote; in fact, Sonic was remarkably consistent throughout the poll until the D2 link was posted. This caused Sonic to lose around a full percent of the vote.

However, the other part to this poll was whether or not Sonic's chances against Mega Man were good, and given that Spring 2005 Diablo was expected to score 34.79% against 2004 Sonic, it would be foolish to deny that Sonic had an extremely good chance at Mega Man when the time came. Diablo underperformed by a full 3%, and the margin is wider if the D2 link never happens. I don't believe that this performance vaulted Sonic 2004 over what Mega Man would be projected to score, but anything can happen in a match that's close enough. All we needed to do now was to sit through more boring-ass matches in the two divisions until their fated winners clashed. 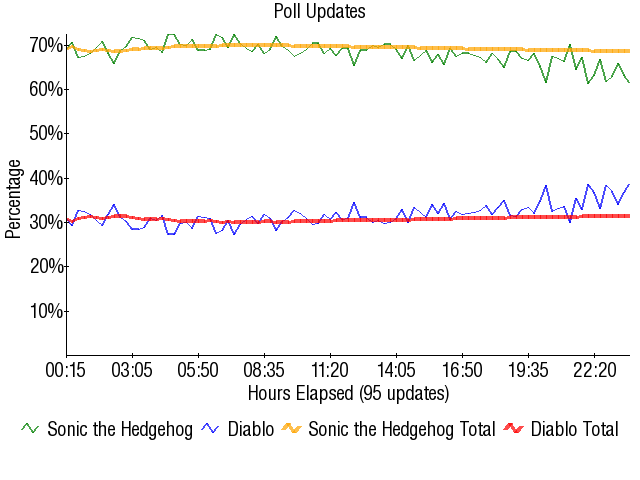 Retrieved from "https://board8.fandom.com/wiki/(1)Sonic_the_Hedgehog_vs_(5)Diablo_2005?oldid=56112"
Community content is available under CC-BY-SA unless otherwise noted.