This match marked the beginning of the Ultimaterializer 24-Hour Match Pic Special, Featuring Ultimaterializer the Picsmith!™ Though to be serious Bacon loved my template idea for the sprite round this contest for whatever reason, so him picking a bunch of my pictures for round 3 wasn't too surprising. Not a bad showing given this was my first contest doing pictures, if I say so myself. According to Zen, "Ulti is the best pic noob ever, thank god he joined in, but WE'LL SEE COME FREEFORM HOW GOOD YOU ARE HAHA PUNK".

Anyhoo, the match. This was some of the weirdest upset hype ever. For literally years, people have been hyping a Ganon > Sonic upset special. It wasn't in jest, either. People were serious about it, and jumped all over this upset when the match was finally set up this contest. Something about Sonic being crap in fourways and all the near-elites being good enough to take him down and break the Noble Nine.

But... really? The premise seemed ridiculous, plus Bacon showed us this particular Ganon picture before bracket lockdown. It was no secret Sonic would have a 2D sprite against Bacondorf, but people stuck with the upset anyway. Even the Oracle people had a consensus of only 53-47 in Sonic's favor here, which in my opinion was just ridiculous. When the match got underway, it went according to form -- that is if the fourways never happened, Sonic scored the 57-43 beating everyone would have expected of him had the fourways never happened.

The fourways and the first round of this contest vastly overrated Sonic Team's weakness. In reality, Sonic himself is still Noble Nine caliber and the side characters are still just fine. Not only did this match restore some order that's been missing from contests for awhile, but it also completely destroyed any hope of a Kirby > Sonic upset. Sonic is doing just fine, thanks, and will probably continue being alright for quite awhile. 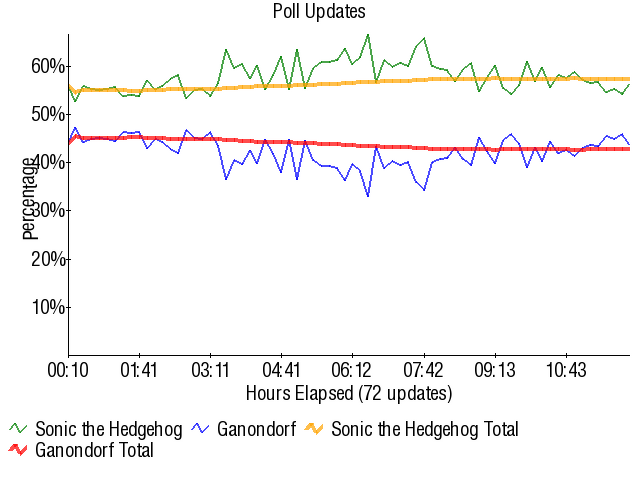 • Previous Match       • Next Match
Retrieved from "https://board8.fandom.com/wiki/(1)Sonic_the_Hedgehog_vs_(5)Ganondorf_2010?oldid=59240"
Community content is available under CC-BY-SA unless otherwise noted.