This was one of the most boring matches of the entire contest, if for no other reason than the fact that Jin managed to make this contest despite zero board support. In every single nomination list posted on this board before the contest, Kazama's name did not show up one single time.

As such, given that Sonic was a lock to win, this match was about two things to watch for on the side: how Sonic would do in preparing for the inevitable clash with Mega Man, and whether or not Jin would turn out to be weaker than Terry Bogard. It was a bit tough to pin down whether or not Sonic had a chance against Mega Man based off of one match against an untested character, but it was easy enough to see how the latter issue would turn out.

Given that most people expected Jin to not be able to match Terry Bogard's 2004 percentage of 19.16%, Jin wound up being a bit stronger than expected. Even more interesting was the fact that Jin stayed pretty consistent throughout the match. Sonic made a push to get Jin under 20% early on, but Jin recovered to get himself to the range of nearly 26%. When Sonic's vaunted day vote hit, he was only able to push Jin down a mere 2%, which some said was cause for concern for Nintendo's favorite mascot.

As for how Jin did so much better than expected, compare the Tekken series to the King of Fighters series. To my knowledge, Tekken is much more popular and has gotten more critical acclaim. There was also the matter of Tekken 5 being released not too long before this contest began, which could have allowed Jin to get into the contest despite absolutely no board support whatsoever. And the board didn't mind a Tekken character making the contest, but all of the big Tekken fans here kept saying that the series could have put better characters into this contest.

As for whether or not this was cause for concern for Sonic's chances to get past Mega Man and make the Final Four or simply Jin doing better than expected, only time would tell. 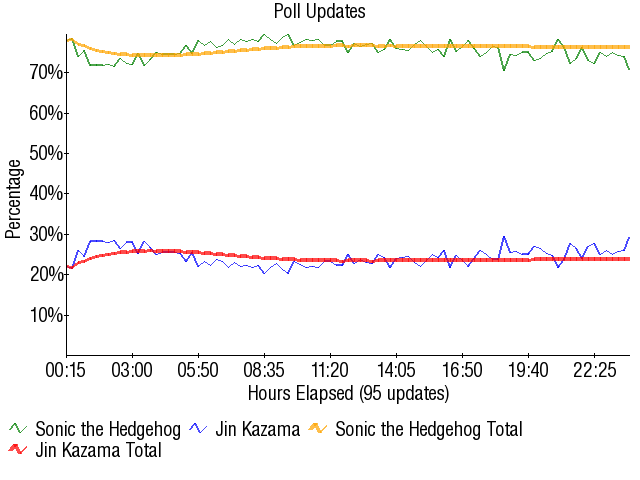 Retrieved from "https://board8.fandom.com/wiki/(1)Sonic_the_Hedgehog_vs_(8)Jin_Kazama_2005?oldid=56072"
Community content is available under CC-BY-SA unless otherwise noted.