Sandbag ZERO is without a doubt the best match picture we've ever had. Hats off to yoblazer for it, even if it wasn't a particularly hard picture to make. It really captures what this match meant before it started.

There's no need to get into how much hype went into this. It wasn't just how we all assumed the winner would win the contest, but the rivalry between these two games that's gone on since Brawl's release date. The match placement really speaks for itself.

And for three hours or so, the match really lived up to its billing. Melee took a pretty sizable early lead thanks to brackets and Board 8 not liking Brawl very much, then slowed down a little over the next few hours. It increased like this until Europe's voting block really kicked in, and then Melee completely fell apart. Brawl was able to come back and take over the lead with little resistance because of what time this all went on, and then it just dominated the morning vote to win the match with over 51%. For how hyped this match was, to only deliver for 3 hours was kind of a letdown. And of course, it was also a letdown because the game we all wanted to see win lost.

I won't lie and pretend I'm happy with this result or anything, but Brawl winning this match changed the course of this entire contest. Brawl winning convinced a whole lot of smart people to rally for Majora's Mask over FFX in the semifinal, because everyone knew Majora had a better chance of beating Brawl in the final than FFX. And then in the final itself, we saw our biggest Good vs Evil paradigm since 2002, when everyone wanted to see Mario lose the final because of all his shenanigans leading up to it. People did not want to see a hated game on a hated system win Game of the Decade on our web site. I and others firmly believe Melee winning this match would have given FFX a much better shot at Majora's Mask, and who knows what happens in a final between Melee and FFX.

One other note from this match before I move on to other stuff: Melee won the USA, Canada and even the UK. It only lost the match because the overall votes of Europe and the far east vastly favored Brawl, and was more than enough to make up the difference. This means in the regions where people played both games competitively, the fanbase preferred Melee. So of course you'll get troublemaker Melee fans like myself saying Melee could have won this during a day match or a 24 hour match, with the actual match that happened not meaning a whole lot. This is a win by technicality and little else, and don't give me crap about how Brawl winning the morning vote so easily means it easily wins during a 12 hour day match or a full 24 hour match. MGS3 easily took the morning vote from Star of the Contest in similar fashion, but very few people believe MGS3 survives any other type of match given what SotC had done earlier. It's the same deal here. Melee could have easily won a more heavily rallied match when people weren't checked out to go and sleep. It's our second example in a row of why the 24 hour matches need to start a round or two earlier, so we don't get situations like this where a game or character wins a match they might have lost in another time.

It should be noted that while the match was a letdown, the Board 8 experience surrounding it was one of the best we've ever had. There was a ton of great stuff going on, but nothing better than The Show going live for a few hours during all this. It was a great time, and it's when we learned how cool a dude BT really was, how foolmo is as funny in real life as he is on the board, how much all this meant to us, and so much more. "You had to be there", as they say. In our new age of too much information making contests a little more predictable with each passing year, it was a nice throwback to the old days. 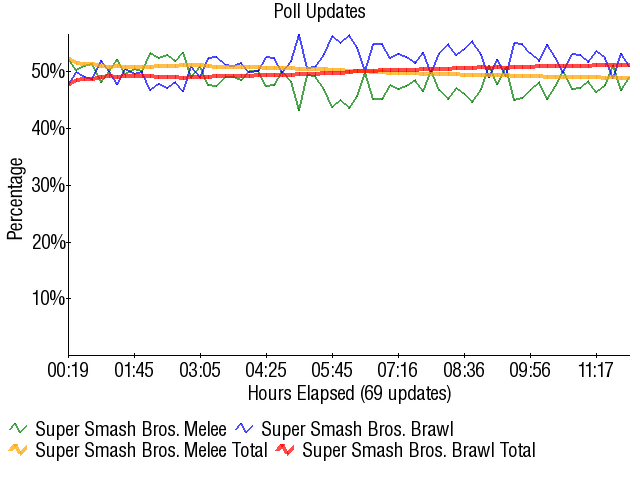