Not only does Gordon Freeman look like House, Kingdom Hearts Tifa looks a lot like Stacy Warner (House's ex wife, who got a lot of screen time in season 2).

Beyond that, very predictable match to end the second round on. All hype for an upset ended when Gordon Freeman almost lost to Peach. To not even break 40% in your loss is pretty embarrassing, especially on the heels of winning Gamespot's own character contest. In fairness, Tifa was at 63% for awhile before Gordon rocked her percentage a bit.

As bad as Gordon Freeman is in these -- and it stopped being a cute fad once he finally won, these days he just sucks in polls and little else -- only two characters have ever broken 60% on him 1 on 1: Sora and Tifa. 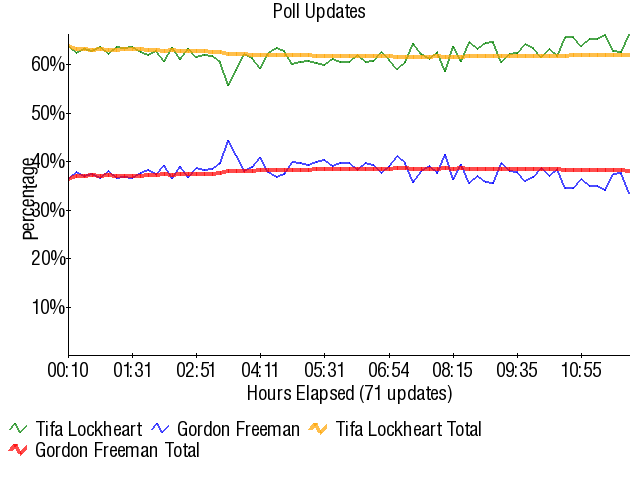 • Previous Match       • Next Match
Retrieved from "https://board8.fandom.com/wiki/(10)Tifa_Lockheart_vs_(2)Gordon_Freeman_2010?oldid=59232"
Community content is available under CC-BY-SA unless otherwise noted.